Grand Kingdom unveiled for the PS4 and Vita

A beautiful new tactical RPG, Grand Kingdom, was announced in this week's issue of Famitsu. Coming to the Playstation 4 and Playstation Vita, it is being headed by Tomohiko Deguchi, the director of Grand Knights History.

Though similar in name, Grand Kingdom is not a sequel to Grand Knights History. It is being developed by Deguchi's company, MonoChro, and will be published by Spike Chunsoft. Chizu Hashii (Blood+) is handling the character designs while Basiscape (Trauma Center, Valkyria Chronicles, Final Fantasy XII) is responsible for the game's soundtrack.

Four competing major powers are locked in a struggle for dominance in the world of Grand Kingdom. Players command a group of mercenaries and it's up to them to decide which faction they will lend their services to.

Combat is carried out on a turn-based order system, but players are able to move through the battlefield and chain combos together to maximize damage. Positioning is an important element in Grand Kingdom and players must think about the strengths and weaknesses of their mercenary group to survive.

Although the game is described as an "online RPG," Grand Kingdom will support offline play. In online multiplayer, players are pit against one another on opposing major powers; invading and defending territories effectively is the key to success.

The first four characters in Grand Kingdom were revealed, one for each affiliation:

Grand Kingdom is currently 65% complete and will be released later this year in Japan. 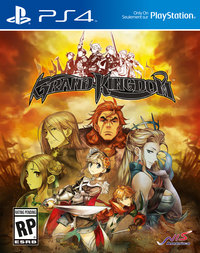