After an official announcement a few short weeks ago, Fallout 4 received an extensively detailed stage demonstration at Bethesda's first ever E3 Showcase. To close out their presentation, the publisher revealed that the newest entry in the Fallout series will be available on November 10, 2015 for PlayStation 4, Xbox One, and PC. Lead designer Todd Howard calls the title the largest and most detailed in the studio's history.

A special 'Pip Boy' edition was also revealed, which comes with an actual Pip Boy that players can use with a companion app on their mobile phones. The app works as a second-screen experience that can be used to navigate the user interface much like the in-game pip boy. (The app can also be used without the Pip Boy, of course.) 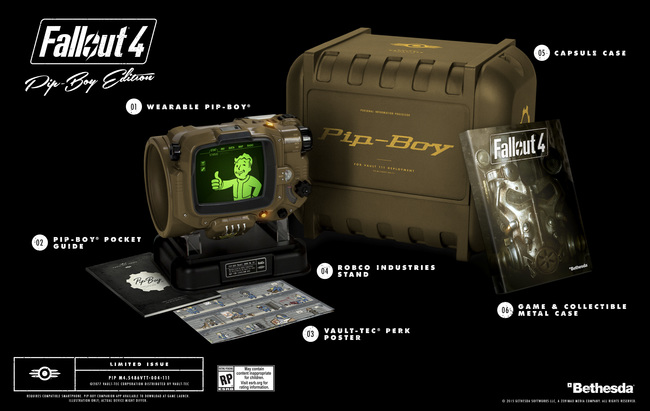 Fallout 4 introduces fully featured character creation, including the option play as a man or a woman. Also featured are much more extensive crafting, building, and creation tools - in which you can even build your own home on the wasteland. Weapon creation also has been further developed, including over 50 base weapons and over 700 modifications for those weapons. Every item in the game has its use in these overhauled crafting systems.

Check out the screenshots, gameplay, and press release below.

Bethesda Game Studios, the award-winning creators of Fallout 3 and The Elder Scrolls V: Skyrim, welcome you to the world of Fallout 4 – their most ambitious game ever, and the next generation of open-world gaming.

As the sole survivor of Vault 111, you enter a world destroyed by nuclear war. Every second is a fight for survival, and every choice is yours. Only you can rebuild and determine the fate of the Wasteland. Welcome home.