Aksys Games has announced that they will be localizing Nippon Columbia's Minarai Majo to Mocomoco Friends as Moco Moco Friends, set to release on Nintendo 3DS later this year in North America - both physical and digital. Originally releasing in Japan back in April, this title is an 'exciting twist on the adventure RPG genre' which follows a young witch and her adventure to collect and raise magical beings known as Moppets in the world of Dreamtopia.

Here are the highlighted features courtesy of Aksys:

You can find the official website here. We have artwork and several Japanese screenshots in the gallery below. 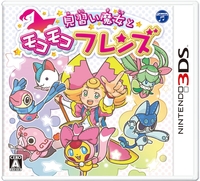