Bandai Namco has revealed a handful of new characters joining the cast Project X Zone 2: Brave New World. Many of these characters return from the original Project X Zone, but in new pairings this time around.

Street Fighter's Chun-Li teams up with Tekken's Ling Xiaoyu, and Demetri and Morrigan form a tandem from Darkstalkers.

Chun-Li and Ling
Demtri and Morrigan

New solo units include Pai Chan from Virtua Fighter, Hibana from Nightshade (a part of the Shinobi series), and Alisa Ilinichina Amiella from God Eater.

Two new non-playable cameos are also introduced - Sylphie from 1988 Capcom arcade shooter Forgotten Worlds, and Miyuki from 1988 Namco scrolling shooter Ordyne. These two run the in-game shop in which you can purchase new items and equipment to raise character stats.

Information about character customization is also provided. Customization Points (CP) are earned from participating in battle, which can be used to both upgrade the skills of your characters and to learn new abilities. Each skill can be upgraded up to 8 levels, which will increase attack damage and chance for critical hits.

CP can also be used to obtain Auto Skills, passive abilities that activate when certain conditions are met, such as healing HP if it is low at the start of an encounter.

The revealed list is as follows (note: in earlier posts we listed Phoenix Wright and Maya Fey as a pair unit, when the duo actually operates as a Solo unit):

Valkyrie (The Adventure of Valkyrie)

Project X Zone 2: Brave New World releases in Japan on November 12th and will launch in North America and Europe early next year. 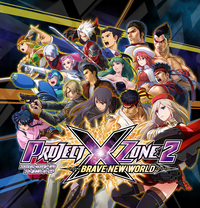