After a several-days long Twitter campaign, Atlus has opened the full website for Shin Megami Tensei IV Final. While the details are the same as revealed in its Famitsu debut, we can see our main cast of characters as well as several of the key elements of the game. The 15-yr old Asahi and the ghostly Navarre are showcased as two of the characters of the new partner system.

In addition, you can view the debut stream recording if you missed it and sample some of the music tracks - such as one of the battle themes which we've posted below.

Several unwatermarked screens and artwork have also popped up, and we've collected those in the gallery.

Shin Megami Tensei IV: Final is set to release in Japan on February 10th on Nintendo 3DS. You can find the first trailer, story, and gameplay details here. 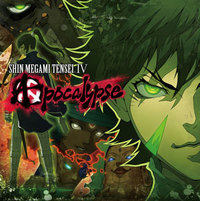