The PlayStation Vita train keeps on rolling as Idea Factory International announced that they will be localizing MeiQ: Labyrinth of Death (referred to previously as Death Under the Labyrinth) for the West this autumn.

This is the second in the Makai Ichiban Kan project from Compile Heart which also includes Trillion: God of Destruction (the stories aren't related), another name for the in-house development team that worked on both titles.

The title will be released in both physical and digital formats and will be compatible on the PlayStation TV. Read more details from the press release below, and you can visit the official site here.

First, the winds stopped. Then, birds vanished from the skies. Finally, the sun set...

And an eternal night fell upon the world.

The reason was quickly identified. It was a story told of in legends. The world had ceased hundreds of years ago as well. But there was a legendary mage who had managed to restart it.

Thus, elders gathered capable young Machina Mages from around the world. They sent them to the legendary city: Machina City, Southern Cross. You must restart the world, and bring an end to this eternal night. That is your mission, and your destiny. Now, go forth on your journey. Go, Estra! 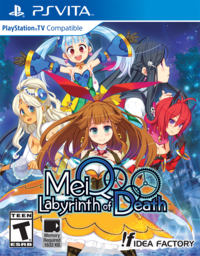