NIS America has announced that they will be launching Cladun Returns: This is Sengoku! in North America and Europe next Spring. The game will be available on PlayStation 4 (physical and digital), PlayStation Vita (digital-only), and Steam.

Cladun Returns is the third title in the 8-bit dungeon-crawling action-RPG series, following 2010's 'Cladun: This is an RPG' (PSP) and 2011's 'ClaDun X2' (PSP, Steam). Cladun is shorthand for 'Classic Dungeon'.

Find the trailer and press release below, alongside some screens and artwork in the galley. Visit the official website here.

About the story: Set in Japan’s Sengoku Era, you wake up in the mysterious land of Arcanus Cella where the souls of the dead gather as they await reincarnation. However, some souls have unfinished business that needs to be settled before they can reincarnate. As the player, you will assist these souls by traveling to real-world locations in feudal Japan and fighting your way through dangerous dungeons filled with monsters and traps.

Cladun Returns: This is Sengoku! Screenshots and Artwork

Cladun Returns: This is Sengoku! 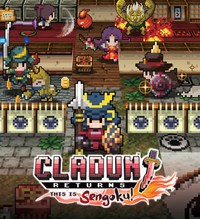