You, the player character, meet a mysterious girl who wants to travel to the great tree Yggdrasil - said to be the entrance to the land of the gods. This journey sets up the main story premise for the game. Five new classes are included: Farmer, Monk, Alchemist, Samurai, & Pirate.

We reviewed the original Etrian Mystery Dungeon back in 2015, finding a competent but straightforward roguelike.

Catch the trailer below. You can find the official website here.

Etrian Mystery Dungeon 2 is set to release on August 31 in Japan for Nintendo 3DS. 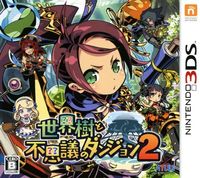