Aksys Games has announced that Zero Time Dilemma - the final entry in the Zero Escape VN/Puzzle franchise - will release on PlayStation 4 this Fall with both physical and digital editions. At the moment this announcement is for North America only.

Find the press release below:

Choice is your only method of salvation and your only means of escape. How much of your humanity will you sacrifice to earn your freedom? As a new age of ruin looms large on the horizon, you must make impossible decisions and weather unimaginable consequences as you straddle the line between absolution and damnation. Plan your escape.

Check out the site HERE.

Excellence In Narrative and Puzzles
Kotaro Uchikoshi is back with diabolic new puzzles and fully animated story sections that push boundaries of interactive storytelling!

Meet Our New Contestants
New comers and familiar faces round out a robust cast of characters. Find out who will live and who will die in this epic clash of wills.

Beautiful HD PS4™ Graphical Experience
Zero Time Dilemma has been beautifully remastered with impressive new HD graphics to accompany the English and Japanese voice over options to flesh out the narrative.

Vast Branching Paths
Multiple endings and non linear story mechanics will keep you coming back again and again to find the truth!

You can pre-order now on Amazon, where the title is priced at $39.99 with a placeholder release date of August 18. You can find our review of Zero Time Dilemma here. 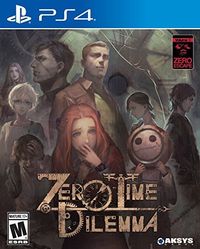