In the last two days alone, Natsume has announced through their Twitter account two different entries in the long-running Kunio Kun series will be heading for western shores later this year.

First up is River City: Knights of Justice. It will be coming to both North America and Europe this summer via the 3DS eShop. Here are the details surrounding the game:

River City: Knights of Justice, known in Japan as Nekketsu Mahou Monogatari, is scheduled to launch as a 3DS e-Shop exclusive this summer. Kunio and his friends go medieval in this unique entry to the River Cityseries as they are transformed into heroes and villains that would be at home in any RPG! Players will use swords, staves, and even magic to bring peace back to Riverandia!

The next is River City: Rival Showdown. It will also be released for North America and Fall sometime in the fall. Natsume didn't specify whether this was also eShop exclusive, but they will have more details during E3. Here are some more details for that one:

River City: Rival Showdown, known in Japan as Downtown Nekketsu Monogatari SP, will launch this fall for the Nintendo 3DS. One night, Kunio is attacked by two mysterious individuals. On top of that, Riki’s girlfriend has disappeared, and it’s up to Kunio to find out the truth! Kunio has just three days to unravel the mystery, and he’ll need your help to take down all who stand in his way! Take on some familiar faces from the River City games and meet new ones in this fast-paced beat-’em-up RPG.

Both games will be playable at the Natsume booth during E3 2017 which will be held on June 15-17. 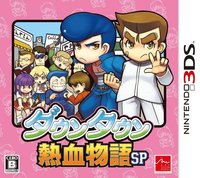