Zwei: The Ilvard Insurrection announced for the west

XSEED Games announced today during their E3 2017 lineup reveal they'll be localizing developer Nihon Falcom's Zwei II Plus (released back in 2009) as Zwei: The Ilvard Insurrection for the west. Here are the full details from the press release:

Originally released in Japan as Zwei II Plus and developed by acclaimed RPG developer Nihon Falcom, Zwei: The Ilvard Insurrection is a charmingly presented action RPG featuring a unique food-based experience system, a colorful cast of characters, and a quirky, standalone narrative. When the haughty vampire princess Alwen du Moonbria saves the life of brash, treasure-hunting pilot Ragna Valentine in exchange for a blood contract, the unlikely duo must set off to recover Alwen’s stolen magic and usurped castle.

The game’s real-time combat is tied to a unique leveling system that allows players to choose when to apply experience toward leveling up or whether they should save it for extra perks later on, and pets can fight alongside players to help take down some of the massive bosses encountered on this lengthy adventure through the land of Ilvard. Fans of vampires, treasure-hunting, fairies, ninjas, luchadores, cat-people, vintage airplanes, magic castles, robots, chickens that lay bombs, and more will find lots to love!  ©Nihon Falcom Corporation. All Rights Reserved.

Zwei: The Ilvard Insurrection will be released for Windows PC sometime this summer. 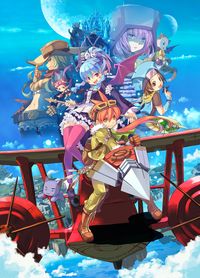