Blue Reflection heading to America and Europe this September

Koei Tecmo announced today Blue Reflection, the new original IP from Atelier developers Gust, will be making its way to our shores. Here are the details about the game itself:

Blue Reflection takes place at Hoshinomiya Girls’ High School, where players assume the role of student Hinako Shirai. When Hinako’s ballet career comes to an end after a tragic accident, she closes her heart off from the rest of the world. However, her life changes when she meets her new best friends, the magical Shijou twins – Yuzu, who is adored by her classmates for her cheerful and warm personality, and Lime, who is more logical and selfish.

The twin sisters bestow Hinako with the power of a Reflector, a champion who can manipulate a mysterious parallel dimension known as The Common. Hinako can freely move and shape this mystical realm’s beauty with her imagination, but she soon understands the very real perils that await her and her friends. As Hinako learns to treasure her companions and creates new bonds with those around her, she gains new strength to help her fight in The Common.

We have some new screenshots as well showing off the protagonist, Hinako Shirai, and her close friends Yuzuki and Lime Shijou, the fashion-conscious Shihori Sugamoto, and the kind-hearted Chihiro Inoue.

Blue Reflection will be released physically and digitally on PlayStation 4 and to PC via Steam in North Amerca on September 26 and Europe on September 29. Koei Tecmo has no plans to release the PlayStation Vita version in the west. Feel free to check out our gallery below. 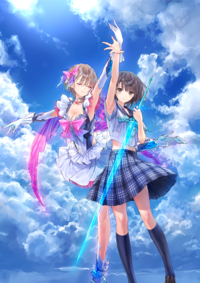