Yomawari: Midnight Shadows doesn't want you to be alone in this new gameplay trailer

While you were previously trying to survive alone at night surrounded by creepy demons, this time, a new tale of horror begins as you take control of two different girls who have been separated.

Here's an overview of the game care of NIS America:

A summer night out with your best friend to watch the fireworks leaves you alone and scared in the dark. Pick up your flashlight and take on the views of two protagonists, Yui and Haru. The two girls have been separated by something seemingly sinister, and it is up to both of them to find each other in the night and make their way home. Along the journey, spirits, ghouls, and strange monstrosities will try to eat both of them whole. So find each other before it’s too late, because the dark is no place to be alone.

And here is the aforementioned gameplay trailer backed by a disarmingly pleasant OST:

Yomawari: Midnight Shadows is scheduled to be released for the PlayStation 4, PlayStation Vita, and PC via Steam in North America on October 24 and in Europe on October 27.

Understand the systems in a new Yomawari: Midnight Shadows trailer

Yomawari: Midnight Shadows will be getting a Limited Edition 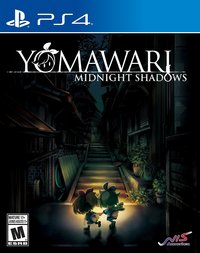