Bandai Namco has announced that Accel World VS Sword Art Online Deluxe Edition is headed to Steam next week, on September 12. The action RPG crossover previously released for PlayStation 4 and PlayStation Vita this past July.

In addition to the base game,the Deluxe Edition for Steam also includes three DLC packs: ‘Castaway from Another World', "SAO Origins', and 'SAO Ordinal Scale', which in total offers more playable characters, costumes, new weapons, and an added bonus Infinite Dungeon with new bosses. There are over 40 characters to choose from both anime universes, and players can team up in PvP and PvE mode to take on quests or challenge one another online. 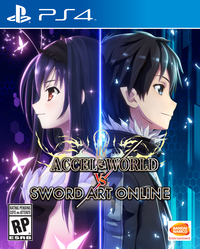