We've just been sent a load of media for Infinite Space, Sega's latest Nintendo DS RPG, including screenshots, character artwork and a trailer.

The DS RPG is due out in March, so it's clear Sega is ramping up their promotional operation for the game. You can check out all the screenshots, artwork and trailers in the Media Vault, but find the new stuff below.


Advertisement. Keep scrolling for more
Post to TwitterPost to FacebookPost to RedditPost to Tumblr
Enjoyed this article? Share it! 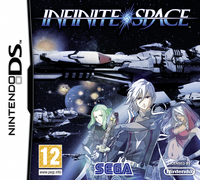