The Pokemon Company announced today that Pokemon Crystal, the final Generation II entry in the long running Pokemon series, is coming to Virtual Console early next year. Today marks the anniversary of the game's original launch in Japan on December 14th, 2000, so this announcement is a very nice celebration of the landmark entry in the series. Pokemon Gold and Silver came to the platform earlier this year, so while it's not surprising to see Crystal make its way onto 3DS, it's still exciting nonetheless.

Priced at $9,99 like the other entries, Pokemon Crystal will also support the 3DS exclusive features such as the ability to battle and trade wirelessly and the ability to use Pokemon Bank to move captured Pokemon over to the modern entries in the series.

While Pokemon Crystal is the same game at heart as Gold and Silver, it brought along a long list of improvements and updates, such as animated battle sprites, the ability to play as a female trainer, and the introduction of the Battle Tower. 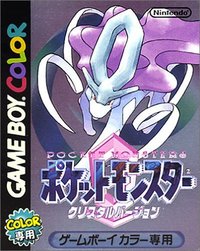