Full Metal Panic! Fight! Who Dares Wins launches in Southeast Asia in English on May 31

Bandai Namco Asia has announced Full Metal Panic! Fight! Who Dares Wins, the upcoming strategy RPG based on the license finally has a release date.

The game will be released exclusively for the PlayStation 4 on May 31, 2018 in Southeast Asia with English subtitles. That includes Singapore, Malaysia, Thailand, Indonesia, and the Philippines. This will actually put it on the same day as the Japanese release, so that's good news for importers.

Check out a new English trailer for the game below:

The release of the game is tied into a brand new season of the Full Metal Panic! television anime series (the fourth season overall), Full Metal Panic! Invisible Victory, which is set to premiere later this spring.

Metal Slader Glory has finally been fan translated into English 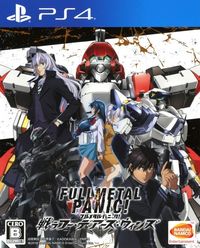