Square Enix will host a press conference during E3 2018

Square Enix has announced they will be participating in this year's E3 2018 event in a big way as they will be hosting their own press conference again this year after not having one since way back during E3 2015, where they announced NieR Automata and I Am Setsuna.

From the released image below, we can see that Square Enix will be airing their showcase on Monday morning, June 11 at 10:00 AM PT. This puts it right before Ubisoft's own press conference which will begin at 1:00 PM PT. Considering it's being called a "special video conference", this will likely be presented similarly to a Nintendo Direct. 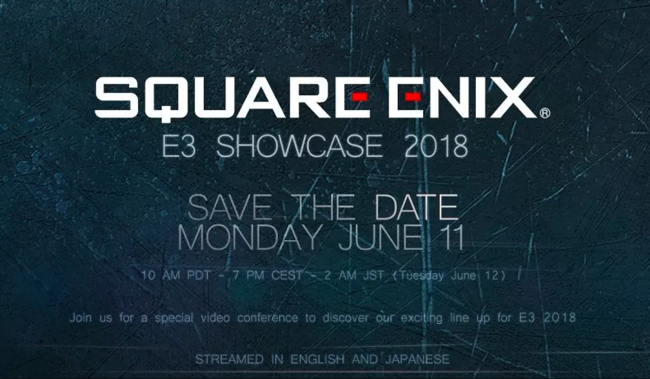 There are some obvious guesses we can make regarding titles that will appear there including Kingdom Hearts III, Dragon Quest XI, Octopath Traveler, and most assuredly Shadow of the Tomb Raider, the latest entry in that series. We'll surely hear about future plans for Final Fantasy XV as well.

Of course, it wouldn't be worth it if Square Enix didn't have a few surprises in store. Perhaps we'll learn about that Avengers game they've been working on with Marvel, and maybe even some more details on the upcoming Final Fantasy VII Remake. And can we please get Final Fantasy Tactics and Xenogears on Steam?

Either way, you can bet we'll share any announcements that are made here on RPG Site, so stay tuned!