Yakuza 3, 4 and 5 remasters intended for overseas fans, will not cut content

Sega Japan held a live stream broadcast last night showcasing the recently announced Yakuza 3, 4 and 5 remasters for PlayStation 4 (among other Sega topics). Franchise lead Toshihiro Nagoshi discusses how these re-releases came to be and how the surge in enthusiasm from western fans is a big factor.

Nagoshi's comments were made at about the 42-minute mark in the video below:

The Yakuza series has certainly been prevalent in the west in recent years, with Yakuza Zero, Yakuza Kiwami, & Yakuza 6: The Song of Life releasing within 18 months of each other, and Yakuza Kiwami 2 set to launch in the west in a few months. These upcoming re-releases are geared to fill in the gap between Yakuza Kiwami 2 and Yakuza 6, so new fans of the series can easily experience Kiryu's story all on one platform.

Additionally, while previously localized Yakuza games on PlayStation 3 contained cut content in the west - infamously with Yakuza 3 and the hostess clubs - Nagoshi states that the goal for these upcoming remasters on PlayStation 4 is to release them uncut.

Yakuza 3 for PlayStation 4 launches August 9 in Japan, with Yakuza 4 and Yakuza 5 to follow. These remasters have not yet been officially detailed for a localized release, but western fans can look forward to Yakuza Kiwami 2 on August 28.

Remasters of Yakuza 3, 4, and 5 are coming to PlayStation 4 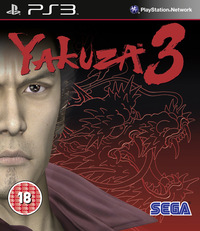