Monster Hunter: World PC is coming out on August 9

A Steam page just went live for the PC release of Monster Hunter: World. Originally teased last week via the game's Twitter account, we finally have some details about the game's Steam launch as well as a date. August 9. That's only a few weeks away! A short trailer was also shared, detailing the announcement:

The announcement also gives some details on the PC system requirements of the game, and they are pretty interesting for a couple reasons. The high requirements still suggest a frame rate of 30 FPS, and details on the game supporting higher framerates (or resolutions above 1080p) are unclear at the moment. We will update this post once we know more.  Even if the game does support 60 FPS or higher, seems like you'll need a beefy rig to be able to take advantage.

Update: This official screenshot does suggest that 4k/60 support for the game is a go. 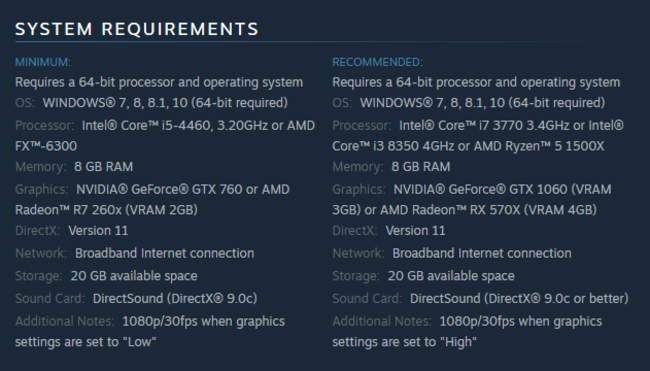 Here's a little bit about the game from Capcom's PR.

In Monster Hunter: World, follow the journey of the elder dragons as they begin their once a decade migration across the sea to a land known as the New World in an event referred to by inhabitants as the Elder Crossing. As part of the Guild’s Research Commission, players must embark on a grand journey to this massive, mysterious land and uncover the secrets behind this phenomenon. As hunters set out on their quests, the Commission’s sights are set on Zorah Magdaros, a colossal elder dragon that rises from the earth like a volcano.

Finally, we have a gallery of screenshots below taken from the PR release and the game's Steam page. You can read our original glowing review of the game here.