FFXII will be playable at Digital Life, which is being held in New York on the 11th of October. The game is released in North America on the 31st of October and has been available in Japan since March. But those looking to have a sneak preview of the English language version can do so at Digital Life.

The full press release is a follows:

Los Angeles, Calif. (September 13, 2006) - Square Enix, Inc., the publisher of Square Enix™ interactive entertainment products in North America, today announced that the complete version of FINAL FANTASY® XII, the next installment in the award-winning franchise that has sold more than 68 million units worldwide, will be playable at DigitalLife 2006. Additionally, New York has declared October 11, 2006 FINAL FANTASY XII Day in a special commemoration in Times Square. FINAL FANTASY XII is available exclusively for the PlayStation®2 computer entertainment system and will be in stores October 31, 2006.

"Square Enix is thrilled to be partnering with DigitalLife to debut the market-ready version of FINAL FANTASY XII," said Daishiro Okada, President and COO of Square Enix, Inc. "DigitalLife's gaming pavilion is a great venue to introduce FINAL FANTASY XII, especially since it appeals to casual gamers in addition to our core fans. FINAL FANTASY XII Day is the perfect way to celebrate this remarkable game, and we are extremely honored to have a declaration from New York City."

Square Enix will showcase FINAL FANTASY XII at DigitalLife (booth #1422) where attendees will be the first to get their hands on the complete version of the game. Eager players will be able to journey through the immense world of Ivalice and discover the magic that led to more than 2.4 million units sold to date since its release on March 16, 2006 in Japan. DigitalLife 2006 will take place at the Javits Center in New York City and will run from October 12 through 15, 2006. More information about DigitalLife can be found at www.digitallife.com.

FINAL FANTASY XII Day will be celebrated in Times Square on October 11, 2006. This prestigious honor highlights the impact that FINAL FANTASY XII has had on gaming and the digital entertainment community as a whole. Square Enix has called out to all FINAL FANTASY fans to unite in celebrating this esteemed occasion. In addition, a costume contest has been announced in which the winners will join Square Enix on FINAL FANTASY XII Day. Information about the contest will go live today at 11:00AM Pacific Standard Time on www.square-enix.com/na.

Story
As war looms on the horizon, the mighty Archadian Empire begins a campaign to subjugate its neighbors. The small kingdom of Dalmasca shares their fate, and it is here that our tale begins.

Two years after the fall of Dalmasca, the citizens are without guidance and direction. In the capital city of Rabanastre, the denizens gather and await the introduction of Archadia's new consul. To Vaan, a young man living on the streets of Rabanastre, the Empire is a hated enemy who took the life of his brother, the only family he had left. In an effort to exact revenge, Vaan hatches a plot to break into the palace and steal from the occupying imperials. There, he gets more than he bargained for as he runs into Princess Ashe, the sole surviving heir to the Dalmascan throne. Together, the two will embark on an incredible journey through Ivalice, tracing the mysteries behind the Archadian Empire's invasion. The choices they make will determine the very fate of the world. 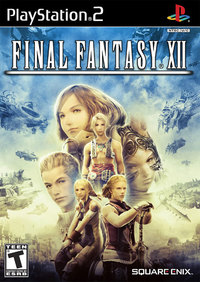