Those who plan on attending Tokyo Game Show 2018 will have an opportunity to try out the game for themselves at the Atlus section of the Sega booth.

Check out the latest trailer for Persona Q2: New Cinema Labyrinth down below. The game is scheduled to be released in Japan for the Nintendo 3DS on November 29. There has been no word on a western localization as of yet. If you missed it the other day, Atlus shared all the character artwork for the game. 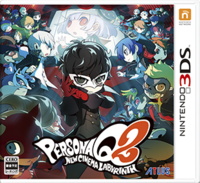