The final clan in Vampire: The Masquerade - Bloodlines 2 has been announced today, and it is one of the fan favorites, the Malkavian. This week's update finishes off the clan reveals for the five base options in the game: Along with the Malkavian, players will also be able to choose Brujah, Tremere, Toreador, and Ventrue. From the seven playable clans found in the original game, this leaves out Nosferatu and Gangrel as options to choose from -- there's always a chance that they show up as DLC down the line though. 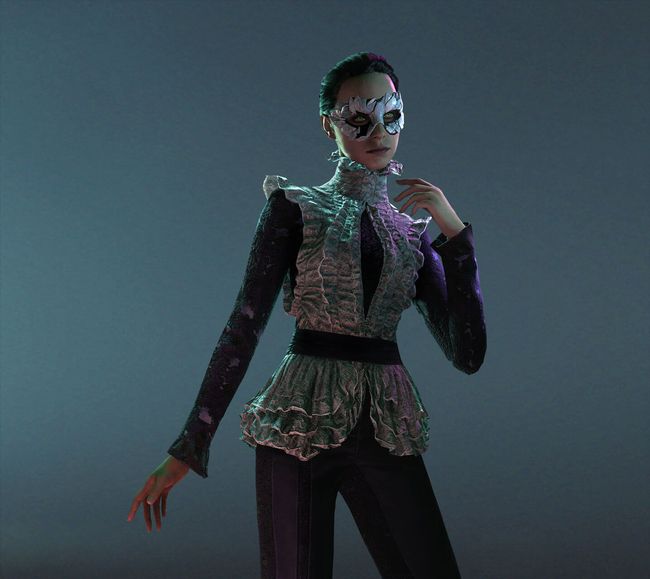 The last of the animated Clan Introduction videos is linked below, introducing the Malkavian and their Disciplines. This specific clan is an interesting option as a final reveal due to the unique dialogue events that were present only to Malkavians in the original game. For instance, Malkavian players would hear random whispers periodically, as well unique events such as being able to talk to a TV reporter or argue with a stop sign. This is because Malkavian's have a power referred to as Insight, which has been presented in a few different ways across the tabletop game editions and Bloodlines. Effectively, it's a network of voices that a Malkavian can hear and is aware of, making them know information that might not have otherwise been perceived through normal means.

This Rock Paper Shotgun article has a few lines from writer Brian Mitsoda about the approach to Malkavian's and Insight in Bloodlines 2. It seems that Malkavian Insight in this newest representation will manifest as a sort of paranoia, but the writers are being careful not to correlate too strongly with portrayals of human mental illness.

Vampire: The Masquerade - Bloodlines 2 is set to release in early 2020 for PlayStation 4, Xbox One, and PC. In case you missed it, you can check out the announcement trailer.

Malkavians have been traditionally ostracized by the Seattle Kindred. While a few managed to claim territory in less desirable districts, very few have ever managed to rise to the levels of the other clans. Because of this, there is a persistent bias against the Malkavian clan that still exists into modern nights.

None of the many nicknames for Clan Malkav - "Lunatics", "Jesters", "Visionaries", "Madmen", and so on - is as fitting as "Oracles". To be of the Clan is to understand things nobody else does; and to be affected by that understanding. Among the clan, this shows itself in psychosis, depression, compulsive disorders, or uncounted other mental illnesses. This hasn't kept the Clan of the Moon from finding a place in Kindred society. Advisers, strategists, preachers, hunters and yes, rulers; all Malkavians walk their very own path.

Unease, curiosity, distrust, pity; the Clan of the Moon elicits many reactions. Still, no vampire sees more than a Malkavian. Players who choose to join their ranks gain access to the secrets of two new Disciplines on top of the individual powers from their Thinblooded past.

DEMENTATION - All Malkavians see further than a mortal could. No Malkavian is left untouched by what they see. Their signature Discipline allows the clan’s members to impart an imperfect version of their psychosis on others, with often drastic results.

Use of Dementation, while thoroughly unsettling, is not a Masquerade Violation.

AUSPEX - Nothing stays hidden to those who gain the Discipline of Auspex. Their senses expanding beyond the boundaries of their bodies, these Kindred slip ever deeper into their condition.

Use of Auspex is not a Masquerade Violation.