Amazon listing reveals upcoming localization for Conception Plus: Maidens of The Twelve Stars

A listing on Amazon has revealed an upcoming localization for Conception Plus: Maidens of The Twelve Stars by Spike Chunsoft. The release date shown on the store page is set at November 5, 2019. Spike Chunsoft will likely announce the game at their Anime Expo panel tomorrow morning at 10:00am PDT.

Conception Plus is a remake for PlayStation 4 of the first Conception title and released earlier this year in Japan. The original game released on PSP in 2012 and never received a localization. Several recent Spike Chunsoft games also receive PC releases, so it's possible Conception Plus will launch on Steam in the West as well.

Conception II: Children of the Seven Stars was released in the West by Atlus USA, and later received a Steam release from Spike Chunsoft.

Find a product description and screenshots from the Amazon page below. You can find the original Japanese announcement and trailer here.

The baby boom is back as this star-filled RPG is reborn on PlayStation 4! The main protagonist, Itsuki Yuge, is suddenly summoned to the magical world of Granvania to save it from evil impurities. As the savior from another world known as “God’s Gift,” Itsuki and his Star Children, born between him and the 12 Star Maidens, are the only ones capable of banishing these impurities. To return to his own world, he must save this one with the help of his Star Children!

Conception Plus: Maidens of The Twelve Stars Screenshots and Artwork

Conception Plus: Maidens of The Twelve Stars 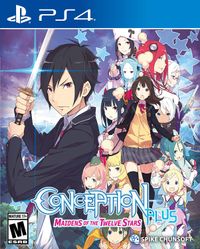