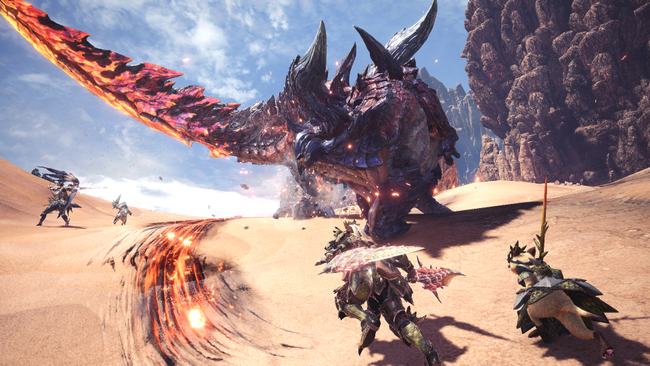 First up is a short 3-minute trailer showcasing Glavenus, who first appeared in Monster Hunter Generations. Glavenus is shown alongside new subspecies Fulgur Anjanath as well as Ebony Odogaron. Fulgur Anjanath is a lightning variant of Anjanath, while Ebody Odogaron is a Dragon-element version of the original who has some new attacks. There's also a hefty amount of footage of the new gathering hub and hot springs areas. The end of the trailer also teases the next monster to be announced.

A second, longer video was also uploaded to the Monster Hunter Youtube channel, which kicks off another series of developer diaries for the game. In Developer Diary #1, Ryozo Tsujimoto, Kaname Fujioka and Daisuke Ichihara all enjoy a hot springs bath while taking a deep dive into some of the updates that are just touched on in the Glavenus trailer. The developer update is also available in blog post form on Capcom's website.

Here are the highlights from the developer update:

New and improved Gathering Hub – the new hub of Seliana streamlines the flow of meeting up with other players and tending to all your pre-hunt necessities by adding quick access to facilities like the Smithy, Resource Center, Botanical Research Center, and Argosy.

Squad Cards and Sub-Leaders – new Squad functionality has been added to easily invite your friends and manage Squad members.

Customizing your new room – now you can change up furniture, various décor items, and even the wall texture of “Your Room” for a more personal touch! And… we’re planning to add a feature that allows you to invite friends to your room, in a post-launch update.

Meet the monsters – you’ll really want to watch the video for this one. The development team put a lot of thought into bringing back Glavenus as faithfully as possible, keeping its sword-like tail while giving it some new twists. They also show off extended gameplay of two newly confirmed subspecies—monster species that have evolved in different ways to adapt to new circumstances, often times gaining new elemental affinities and behavior tendencies. On the menu today, we have the electrifying Fulgur Anjanath and the more vicious than ever Ebony Odogaron!

We've also got a whole slew of new artwork and screenshots showing off the Ebony Odogaron and Fulgur Anjanath, alongside the new gathering hub and NPC renders. We've got them gathered up in the gallery below.

Monster Hunter World: Iceborne is set to launch on September 6 for PlayStation 4 & Xbox One, while the PC release will follow at some point this Winter.