Blue Isle Studios has announced that 'massive online sandbox RPG' Citadel: Forged with Fire will launch for PC, PlayStation 4, and Xbox One on October 11. The game has been in Early Access since Summer 2017, and the console versions will be available at retail through Solutions 2 GO, the exclusive worldwide distribution partner.

Citadel: Forged with Fire is developed by Toronto indie outlet Blue Isle Studios. In the game you play as aspiring wizards learning the arts of wizardry and broomstick flying while ultimately building a kingdom. Since its Early Access launch, Blue Isle Studios states to have implemented more than 100 patches with a variety of bug fixes, balance updates, and content additions.

Find a new trailer, description, and screenshot set below. You can also check out the Steam page and official website.

Citadel: Forged With Fire is a massive online sandbox RPG with elements of magic, spellcasting and inter-kingdom conflict. As a newly minted apprentice of the magic arts, you will set off to investigate the dangerous world of Ignus. Your goal: create a name for yourself and achieve notoriety and power among the land’s ruling Houses.

You have complete freedom to pursue your own destiny; hatch plots of trickery and deceit to ascend the ranks among allies and enemies, become an infamous hunter of other players, build massive and unique castles, tame mighty beasts to do your bidding, and visit uncharted territories to unravel their rich and intriguing history. The path to ultimate power and influence is yours to choose.

Welcome to the magical world of Ignus: a 36 square kilometer landmass of sweeping plains, dense forests, craggy mountains, festering swamps and frozen tundra. Leave no stone unturned as you explore dangerous caves and ancient ruins to recover powerful artifacts and uncover a rich history spanning thousands of years. Embark on a journey across the land to find the perfect place for you and your allies to call home.

Master a diverse range of powerful spells. Discover your conduit of choice among a huge selection of mystic wands and staves, magically imbued axes, swords, maces and hammers, and enchanted gauntlets.

Create Alliances And Forge An Empire

Align your efforts with fellow Warlocks to create a mighty House. Create an internal hierarchy of power, design and plant your own House flag, share your resources to build huge castles and team up to hunt legendary creatures. Wage war with opposing Houses or hatch plans of deceit and trickery to cause internal chaos and ascend the ranks within your own.

Use the Pacify spell to tame ferocious creatures and amass an army of minions. Tamed companions will gain experience and grow with you as you travel the world and triumph in battle. Siege an enemy fortress with a horde of savage Orcs, ride Horses and Direwolves to quickly traverse the vast landscape, or rain fiery death upon your enemies from the back of a Dragon!

Construct your Dream Castle using hundreds of structural pieces found within a flexible and easy-to-use building editor, or take advantage of the dynamic destruction engine and crush someone else’s. Enhance your fortress with magical structures like defensive shields, attack towers, mana pools and respawn stones. Unlock new fortification materials and building features as you level up: with so many materials and pieces to work with the only limit is your imagination.

Find A Near Limitless Variety Of Loot

Are you an old, bearded and wise Warlock or are you a young, ambitious and strong-willed Mage? Create your own style with a huge variety of clothing and weapon options. Discover a near limitless variety among these items’ stats with Citadel’s rich and deep loot generation system; every loot pull is different and ensures that fighting monsters and exploring dungeons is a constantly rewarding and memorable experience.

Achieve The Power of Flight

Why walk when you can fly? Use your Wizardly prowess to take to the skies. Enjoy the convenience of a custom-crafted broomstick, tame and mount airborne companions like dragons and giant eagles, or use alchemy to concoct potent elixirs allowing flight without the aid of beast or broom. 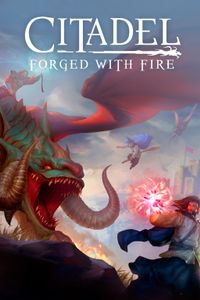