Daedalic Entertainment has announced it will publish tactical combat RPG Iron Danger from developer Action Squad Studios. The game is set to release in March 2020 for Windows PC, Mac and Linux.

Revealed back in 2018, Iron Danger is a tactical isometric RPG that features time manipulation mechanics that sets to combine the best aspects of real-time and turn-based gameplay. The game follows Kipuna, a village girl who finds herself with these time abilities and at the center of an emerging war.

Find a teaser trailer, game overview, and screenshot/art set from Daedalic Entertainment below. The Steam page can be found here.

Iron Danger is set in a world of magic and machinery that draws from both the Nordic myths that inspired J.R.R. Tolkien’s epic fantasy, and from modern steampunk and tech-noir. Players take on the role of Kipuna, a sharp-minded village girl who becomes imbued with an ancient power that grants dominion over time and death. Drawn into the midst of a war between the city of Kalevala and the armies of the Northlanders, players must master their powers in order to protect mankind against total destruction.

With the game’s engaging time-control mechanic, players can rewind time for up to five seconds at any point in order to try different strategies and move combinations to find the right one for the job. Time manipulation gives traditional tactical combat a puzzle-like element, as players can continuously test new approaches and synchronize character actions for the perfect outcome. 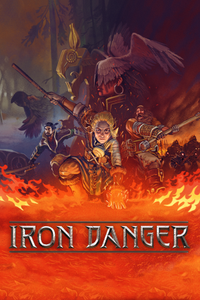