Back in February of last year, I took a gander at Divinity II for my review and was left sorely wanting. As I mentioned in the article, I felt that the gamehad a whole plethora of issues with the game, from its poor pacing, its bad gameplay mechanics that left me scratching my head, and a loss of any sense of enjoyment that was part of the series up until that point. Well, thankfully, we are hearing word that Atlus USA will be handling the publishing duties for Divinity II: The Dragon Knight Saga for the Xbox 360.

This remastered version of Ego Draconis came out last year as a digital download, and received much stronger reviews than its predecessor, and for very good reasons. Divinity II: The Dragon Knight Saga combines its own tale along with both Ego Draconis and its expansion pack, Flames of Vengeance, into one pack to include over 100 hours of content. It also features a much improved game engine and an overhauled user interface.

This is definitely a strong example of a developer listening to the outcries of fans, but is it enough to pull this title out from obscurity after many people passed it up for stronger fare in early 2010? We'll see if whether it's too little, too late when the game arrives for the Xbox 360 on April 12th. Players who preorder now will also receive a copy of the game's soundtrack, something I enjoyed from Ego Draconis. In the meantime, enjoy the announcement trailer from Atlus below. It certainly looks better. 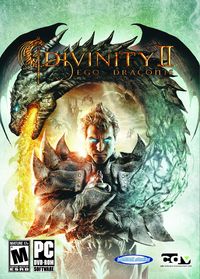