Sega has announced that Sakura Wars (formerly Project Sakura Wars) will launch in the west on April 28 for PlayStation 4. The game will feature Japanese voice acting with English, German, French, and Spanish subtitle options. Launch copies of the game at retail will include a reversible cover artwork and sticker set. Sakura Wars previously launched in Japan in December 2019 as Shin Sakura Taisen.

This newest entry in the series is set 12 years after 2005's Sakura Wars V: So Long, My Love in an alternate past of Taisho 29, or about 1941. Unlike previous games in the series, Sakura Wars now has an action combat system rather than a tactical-styled one. PlayStation Blog has a new post up detailing the creators behind the game and the efforts in localizing the game westward. The game's official website has also opened.

A new trailer for the new launch date can be found below. Sega has also released a detailed overview for the game, as well as official English character introductions for the main cast. We've shared everything below.

A Callback for Something Truly Special

One of SEGA’s greatest IPs in Japan, Sakura Wars debuted on the SEGA Saturn in 1996 and grew into a successful franchise encompassing sequels, spin-offs, anime, manga, and even stage shows. Some of the best creative minds in the anime and JRPG industries have now joined their talents with SEGA to bring Sakura Wars to a new generation, and a new audience in the west.

For this reboot, SEGA brought back many of the original creators and received major contributions in character design from such luminaries as Tite Kubo, Yukiko Horiguchi, BUNBUN, Fumikane Shimada, Ken Sugimori, Noizi Ito, Shigenori Soejima, and more for a truly spectacular production.

The Imperial Combat Revue takes the stage as Tokyo’s defense force against a demon threat in this extravagant adventure. Soldiers in wartime, but theater performers in peacetime, the Revue’s Flower Division is not living up to their legacy and is at risk of being shut down. As newly appointed captain Seijuro Kamiyama, it’s up to you to turn the team around.

During your adventure, you’ll interact with a colorful cast of characters via the dynamic LIPS dialogue system (a trademark of the series), where what you say and how you say it makes an impact both on and off the battlefield. This flows into the high-energy combat system, featuring giant steam-powered mechs called “spiricle armor” that can only be piloted by those with strong spiritual power. All of this is presented in the style of an exciting anime production, complete with gorgeous animated sequences and dramatic character arcs that will leave you eager for what happens next!

Physical editions of Sakura Wars include a reversible cover featuring the original Japanese cover art for the game, along with a sticker set featuring the main cast of the game. Speaking of which, you can learn more about our new crew below!

Sakura Wars takes center stage on the PlayStation 4 on April 28, 2020 with more information about our PlayStation digital release soon! For more information, please watch our latest trailer, and be sure to visit the official website: https://games.sega.com/sakurawars/. 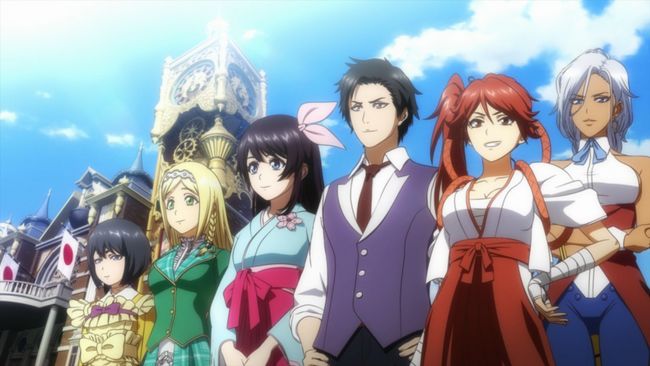 From left to right

Azami Mochizuki (VO: Hibiku Yamamura): A descendant of the Mochizuki clan of ninja, she displayed a tremendous aptitude for martial arts, battle tactics, and weapon-handling from a very young age. Thanks to the strict training she has undergone her entire life, she believes unquestioningly in the 108 Village Rules passed down by her clan, striving to obey them at all times.

Clarissa “Claris” Snowflake (VO: Saori Hayami): A sweet, intellectual girl from Luxembourg who always has her nose in a book. Her ferocious curiosity about the world drives her to read every day and learn about all kinds of topics.

Sakura Amamiya (VO: Ayane Sakura): A novice stage performer who joined the Flower Division to follow in the footsteps of her idol, onetime mega-star Sakura Shinguji (star of the original trilogy). She believes strongly in defending Tokyo and lifting the spirits of the populace and fervently prays the theater will eventually be restored to its former glory.

Seijuro Kamiyama (VO: Yohei Azakami): Formerly a captain of an auxiliary ship in the navy, he was reassigned to the Imperial Combat Revue to oversee the reformation of the Flower Division.

Hatsuho Shinonome (VO: Maaya Uchida): A shrine maiden whose beauty draws visitors to her family's historic Shinonome Shrine. Born in the working-class neighborhoods of central Tokyo, she's a true child of the city who loves her people, her festivals, and everyone in the capital. Despite her brash exterior, she's a dependable comrade.

Anastasia Palma (VO: Ayaka Fukuhara): Star of the European stage who hails from Greece. She recently transferred to the Tokyo revue after spending time in various revues around the globe. A world-class singer and actor, she has the charisma and confidence to play everything from the male lead to the bewitching temptress.