During Sony Interactive Entertainment’s PlayStation 5 reveal event, a new trailer was shown for a remake of Demon’s Souls, the first title in the Souls series. It is in development at Bluepoint Games, set to release on PlayStation 5.

The trailer shows several recognizable locations and creatures from the game, recreating parts of the original game's cinematic trailer, now with higher visual fidelity than ever. Check it out below.

Oddly, the trailer description for the game used to read as the following, mentioning a new "Fractured Mode" found in the game as well as two different game modes for performance. However, the description has seemingly since been edited to remove these mentions.

From JAPAN Studio and Bluepoint Games comes a remake of the PlayStation classic, Demon's Souls. This remake invites players to experience the original brutal challenge, completely rebuilt from the ground up and masterfully enhanced with a new “Fractured Mode." In addition to beautiful shadow effects and ray tracing, players can choose between two graphics modes while playing: one focused on fidelity, and one focused on frame rate.

From JAPAN Studio and Bluepoint Games comes a remake of the PlayStation classic, Demon’s Souls™. Entirely rebuilt from the ground up and masterfully enhanced, this remake invites you to experience the unsettling story and ruthless combat of Demon’s Souls in unparalleled visual quality and incredible performance. Coming to PlayStation 5.

While the original Demon’s Souls, released for PlayStation 3 in 2009, didn’t take off in the same way Dark Souls did, the game offers a style slightly different from its successors, using a more segmented level based design rather than an interconnected world.

We were not given a release window, or even a year, for the re-release, so we'll have to wait for more information. 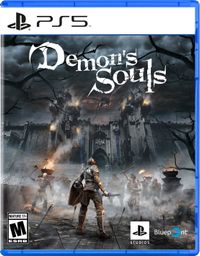