Grab Pokemon Black/White and the legendary Victini, too

With Pokémon Black and Pokémon White's release yesterday in North America, hundreds of thousands of Pokémaniacs have been clamoring to grab their versions and do battle in the brand new fifth generation of Pokémon.

Not to leave anybody with just a game, players can use their WiFi connection from now until April 10th, 2011 to snag a limited-time Liberty Pass which will give players access to capture the legendary Victini, the Victory Pokémon, in a special encounter.

Victini will come at level 15 and with the exclusive Victory Star ability that raises its own accuracy, as well as the accuracy of two other Pokémon in triple battles. Its moves include Confusion, Endure, Incinerate, and Quick Attack.

Don't wait and miss out on this special offering from Nintendo! 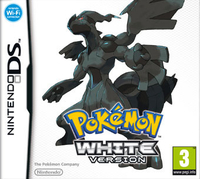