Versus Evil and RUNWILD Entertainment have announced that cooperation action RPG Almighty: Kill Your Gods is planned for release on PC and unspecified Consoles with a new reveal trailer. The Steam page can be found here.

The two minute long gameplay footages focuses mainly on combat with glimpses of the game's Home Island system which involves crafting and upgrading in order to defend from enemy attacks. You can watch the footage below, and we've got a first batch of screenshots as well.

Here are some further details from publisher Versus Evil:

Hunt demons, monsters, and gods solo or online with friends in this action RPG. You are an Alpha, a magical warrior infused with the power of your ancestors. Run, leap and fly across islands, ripping your foes to pieces, and rebuilding your shattered Home Island with their remains. Bring low the oppressive false gods, protect your kindred and become Almighty.

+ Use magic gauntlets for devastating ranged or melee attacks, and amulets to summon powerful spells in this 3rd person Action RPG.

+ Craft and customize powerful gear to create your own unique character class and play styles.

+ Fight in reactive, changing environments. Anger the gods and see the islands change before your eyes. 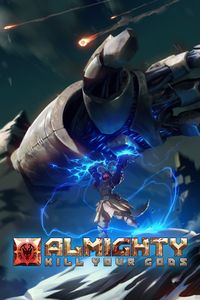