Xenosaga III: Also Sprach Zarathustra is the third and final game of the ever-popular Xenosaga series, and it proves to not disappont its fans. The graphics are gorgeous, all secrets and mysteries will finally be cleared up, and Xenosaga will end.

Xenosaga III keeps the battle system of the first two games, which is the turn based battle system that we are all used to. However, it operates in a manner similar to Kingdom Hearts: Chain of Memories, in that when moving around the map, monsters can be seen and avoided. To initiate a battle, you walk into a monster, and go into a battle mode. Then, you can use regular attacks, tech attacks, ether attacks, and boost attacks or go into ES battle-suit combat, in which human characters can control a battle suit that gives them more android-esque abilities.

There are trailers available depicting the the battle system, as well as an omnious look at a small boy being separated from his mother. In another, it begins with the words "Kami ga shinda" which translates to "God is dead/God has died", a clear reference to Nietzsche's "God is dead, and we have killed him." 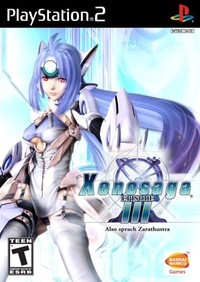