Dirge of Cerberus is part of the collection of spin-offs from the hugely popular Final Fantasy VII PS1 game, known collectively as the "Compilation of Final Fantasy VII." It stars the original game's character Vincent Valentine (Insert screaming fangirls) clad in his usual attire and looking sexier than ever in revamped PS2 graphics. Throughout the game, Vincent fights a Shin-Ra organization known as the DGS (Deep Ground Soldiers).

The DGS were a secret underground project that Shin-Ra was developing even during the time of Final Fantasy VII, but were trapped under Midgar after Meteor struck. Their purpose is to wake the final weapon, OMEGA, from its sleep. However to do that, they need Vincent to lead the way. As Vincent fights the DGS throughout the game, he comes face to face with the inner demons of his past, one which is back to haunt him.

Unlike the game from which this one came, FF:DoC does not use the traditional Command Based battle system of FFVII. Instead, Square-Enix have opted for a much more fast-paced, FPS-like battle system. This means a lot less waiting for your character's command window to pop up, and a heck of a lot more prancing about as Vincent, button mashing, yelling at the TV and shooting at just about anything that moves. However, the game will not purely be your typical Shooter -- Square has named it as a "third-person shooter role-playing game" (or TPSRPG), which certainly is an interesting genre name.

He's gonna feel that one in the morning

As an RPG, DoC will contain a lot of Final Fantasy elements; Vincent will still have an HP (Health Points) Bar, as well as MP (Magic Points). There is also a value for Level, where Vincent can level up by killing enemies (Who also have HP, and presumably MP). Familiar Items and weapons are bound to appear, and a number of familiar faces will also make an appearance in the Final Fantasy VII spin-off, most notably Vincent Valentine himself, Reeve Tuesti/Cait Sith, Yuffie Kisagari, Lucrecia Crescent, Cloud Strife, Barret Wallace, Tifa Lockhart, Cid Highwind, Red XIII, Hojo and Rufus Shinra.

Now, a lot of people assumed that DoC would be an Action/Adventure game a bit like Devil May Cry and the famous Halo series, but designer Tetsuya Nomura categorized it as a "Shooter RPG". The game was released in Japan on 26th January 2006, with a North American release looking very probable of August 22nd. This is the last game in chronological order in the Compilation of Final Fantasy VII, (Taking place 3 years after FFVII, and 1 year after Final Fantasy VII: Advent Children) and is often referred to by the staff of the game as "The ending finale to Final Fantasy VII".

Azul, The Cerulean. Not the best guy to run into late at night

Dirge of Cerberus received harsh criticism in Japan, although the gaming magazine "Dengenki PS2" rated the game a very respectable 32/40. However, Famitsu scored it a lower 28/40.

However, the US and quite possibly EU release is being very radically tweaked following the harsh criticism in Japan. A lot of these are changes to the way Vincent moves and acts; he will now run 1.2 times faster, there will be less of a drag when you have your weapon in aiming mode (which can be reduced even further by customizing your weapon to be lighter) Vincent can also double-jump, and unleash attacks in midair, be it firing guns or punching some poor guy's lights out. The diving roll dodge move has been switched out for a dash-out-of-the-way move which is just as effective, but lets Vincent assume the slaughter of enemies much quicker. And lastly, Vincent's limit break will no longer detract from his MP, instead you'll have to find special-use items around the game in order to use it.

Vincent has his work cut out for him.

To add to this -- there is no longer an easy or difficult mode -- you will begin with the Normal and Hard modes, and after finishing either of those, an Extra-Hard mode will be unlocked, containing a mind-boggling 40 extra special missions. You will also gain access to a character model viewer, artwork, and sound archives by completing these special missions. However, the online multiplayer mode will cease to exist in the "upgraded" version. [source for this: GameSpot]

The Square-Enix E32006 site now has news that a side story of Dirge of Cerberus known as "Dirge of Cerberus Lost Episode - Final Fantasy VII" for the mobile phone is going to be released at some point. This is supposed to be a missing chapter of the Dirge of Cerberus series featuring something known as the "ProtoMateria".

A European release date is, as of yet, unknown. Check the site for news on a European release as and when it's released.
Advertisement. Keep scrolling for more
Post to TwitterPost to FacebookPost to RedditPost to Tumblr
Enjoyed this article? Share it! 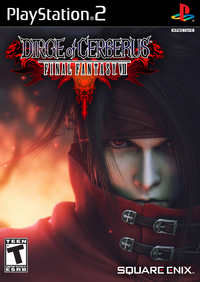