King's Field Additional II takes place a few decades later
King's Field Additional I (KFA1) went on sale on July 20th of this year. Now, the ideas for the continuation of the series have appeared. The setting is established to be several decades after the preceding game. In KFA1, a street in Traujito was shattered by a tremendous earthquake. To better grasp the damage situation, an inquiry commission was sent to town. However, the commission leader was killed in the line of duty. As a result of this, the protagonist went on a journey to find out what happened to the leader.

Story
Rikisutoria's king had died several decades ago. In recent years, the kingdom had been rife with repeated occurrences of natural disasters. The interval after king's death had been a momentary relief to the citizens, but there was soon fresh anxiety with the natural disasters. One of Rikisutoria's territories, Traujito, was the result of former riots and its historic remains were decaying. In town, a visible shadow rose from the rubble. This person was thought to be the king's resurrection, but some people were skeptical. It began to be said that the king's figure was seen in the ruins. The republic government of Rikisutoria, after having shut the underground labyrinth for several decades, dispatched a second inquiry commission to investigate.

The new dispatched inquiry commission leader was the only son of the last commission leader. One day, a lone envoy was dispatched from the country. The envoy informed the people that the last commission leader was the only person to die in the labyrinth in the line of duty. The youth, upon hearing of his father's death, drew closer to the envoy. He pressed the envoy to be more straightforward and answer some queries, but the envoy answered nothing and left. The next morning, the youth set out of his house. At a steady gait, he ventured toward Traujito. By himself, the lad began his journey conflicted, in utter loneliness, and the first act was finished.

For screenshots, check out the Famitsu Web Site, which has before and age screenshots comparing KFA1 and KFA2. 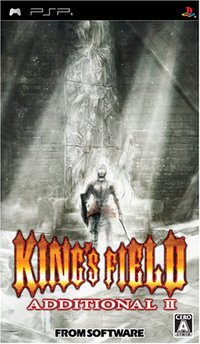