On a personal quest to find my next 'Upcoming RPG to get all excited about', I stumbled accross this little gem of a game. Created by acclaimed games producer Level 5, it's fair to say expectations are high. I've heard good things about previous Level 5 releases (Dark Cloud, Dark Chronicle, Dragon Quest VIII) and after reading plenty of previews and import copy reviews, I officially decided that Rogue Galaxy is going to kick ass.

The story follows young fair-haired individual Jester Rogue, swordwielding ace and ambitious in his dream of travelling to the stars. A dream which comes true for Jester when he joins a band of pirates on a 'Quest for the Holy Grail' - a search for a mythical planet said to contain the secret of eternal life. As you can probably guess, Jester's band of space pirates aren't the only group in search of such a planet - ensuring the adventure to be a dangerous, action-packed experience for Jester.

Our hero forgot his shades

Said action doesn't take long to manifest itself - with monsters gearing up and attacking the ship and its crew shortly after having departed Jester's backwater desert homeplanet, Rosa. The ship is full of a whole variety of different characters, each having noticeably (and humorously) different traits that don't take long to show themselves at all. From fluffy white talking cats to robots named Steve, it seems the sky truly is the limit on characters.

What has gamers so excited about this game, is the claim that Rogue Galaxy has virtually NO loading times at all. The only load times the game seems to sport are when saving or loading a game, a brief blank screen when switching between cutscenes, and when teleporting right across the game's map. This fully streaming world is achieved with absolutely no cost to the game's looks - Rogue Galaxy looks absolutely amazing.

Withouat a doubt, this game is a truly beautiful work of art all the way through

As most games are when released close to the next generation of consoles, Rogue Galaxy is one of the most visually stunning of games to grace the PS2 - or indeed, this current generation of consoles. Remember playing a game where you'd be running along, frustrated at only being able to see a few yards infront of your character, and all of a sudden you're shot in the head by an enemy who suddenly appeared out of the 'mist' of unloaded game? Rogue Galaxy's beautiful graphics let you see far and wide as you roam whatever world you happen to land on. Characters, backgrounds, buildings, everything has a whole ton more detail to it, helping the player feel as if he or she is actually right there, in the virtual world on their TV screens.

I'm told (Being too unfortunuate to get my hands on an import) exploring the vast expanse of the Rogue Galaxy err.. Galaxy is made quite entertaining by the lack of restrictions (or ammount of control.. half full or half empty?) surrounding your character. Players can jump, swim, climb, grab on to ledges - much like more action based RPGs like The Legend of Zelda, except Rogue Galaxy is a hell of a lot more 'Hardcore Japanese RPG' in the way battles are carried out, stats are built, and so on.

The battle system is very action based - much like Final Fantasy XII and Kingdom Hearts where the player controls one character and the rest run around according to their AI settings. In Rogue Galaxy, enemies will spawn onscreen and Jester can jump about, hack, slash, and even perform long-range attacks and combos. Combos can even be chained between enemies, so that if you finish off one enemy before the end of the combo, your character will simply turn around and finish it on the closest alive enemy. The battle system in this game gets top brownie points for variety - players can jump, attack in the air, pick up items in order to throw them at enemies, and some enemies even have special requirements in order to inflict damage on them properly. The gameplay certainly looks to be an exciting part of Rogue Galaxy.

Looking at the release dates, you may think the North American release is a bit far off the Japanese one - well yes, but during that time the developers have been adding in brand new features exclusive to the North American release. Expect a whole new planet, more sidequests, items, and so on. Unfortunuately, the earlier release date means the European version of the game will lack many of these changes.

All in all, Rogue Galaxy is sending out all the good vibes we could possibly want. A proven developer, stunning visuals, great gameplay, varied characters, and what looks to be a solid plot. We can only wait and hope that the expectations in this preview are met. 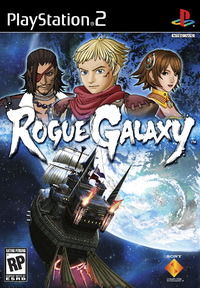