Though Bethesda announced a long line-up of new FPSes at E3 this year, they also unveiled Hunted: The Demon’s Forge, dubbed an RPG-lite/third-person shooter. Hunted takes place in a dark fantasy setting; innocent townsfolk across the land of Kala Moor are disappearing, and two mercenaries, E’lara and Caddoc, have been hired to journey to The Demon’s Forge. The game focuses on a co-op playing between two main characters.
E’lara and Caddoc are two equally important characters that bring the co-op aspect of the game to life In the first 10 minutes of gameplay, I could see a real chemistry between the two characters – especially on the battlefield. Character interaction and development isn’t contained within random, jarring cutscenes, but it happens in real time as the game unfolds. 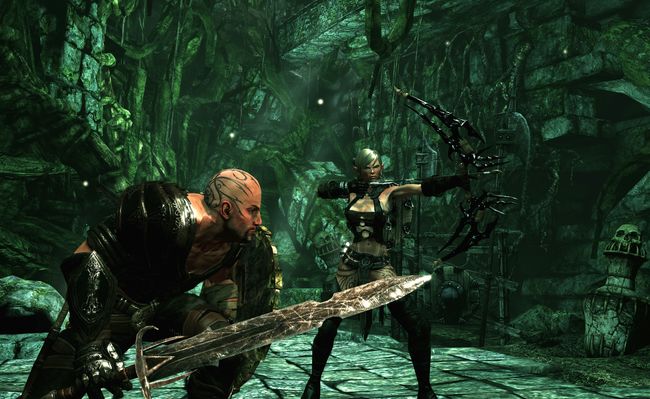 Caddoc, on the left, and Elara on the right.

E’lara is a nimble, impulsive female elf who is quick with a bow and plunges headlong into trouble while Caddoc, her muscular tank of a companion, cautiously follows to clean up her mess. The gameplay concepts are simple and familiar to avid gamers: E’lara fires ice arrows to freeze skeletons from a distance and Caddoc rushes in to smash them with his huge, hulking sword.

That said, Hunted isn’t about set roles – E’lara’s strength may be with a bow and Caddoc’s with a sword, but both use magic and are capable of melee or ranged combat with a simple switch of a button. The action-packed gameplay requires you to continually switch between all these types of attacks, similar to the Fable series.

But the innovation here is that the characters really depend each other.  As Elara, I needed the player controlling Caddoc to cover me while I aimed a couple arrows at the ropes holding up the drawbridge, or to attack skeletons that got too close to me when I was using the ballista to knock down pillars.

This is especially important because the game is always in either third-person limited or first-person mode (when shooting), so it’s virtually impossible to see enemies immediately behind you.  Additionally, both characters use magic and items to assist the other player. Both players can cast a battle charge spell that boosts their companion’s abilities for a short while, and if you get knocked out, you rely on your partner to restore you back to life. 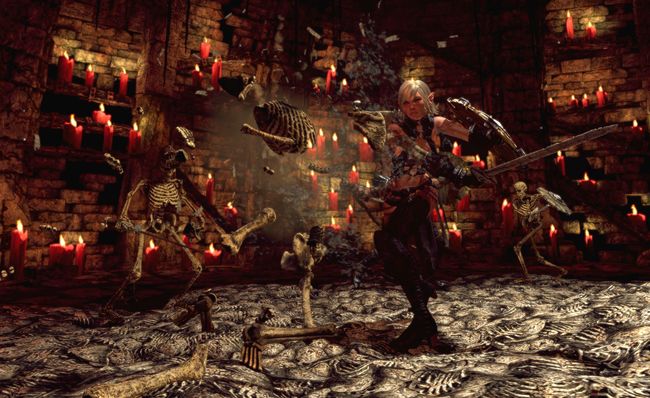 One of the most realistic aspects of Hunted is the dialogue. It happens naturally as you’re walking around and the lack of subtitles gives it a realistic feel. The downside of this it's really easy to miss on what they're saying. However, it’s still an improvement over games like FF 13 which in which characters merely comment on the scenery or tell you you're going in the wrong direction.

The upside is that there are more opportunities for character development in a way that feels natural; the two of them have a chummy atmosphere no matter how dire the situation – they poke fun at each other and joke around, exactly in the way you’d expect two companions who have traveled for a long time together to act.

Another effort to make the game seem more realistic is the unobtrusive B-button that lets you interact with the world. When walking around in environments, players can simply interact by pressing B. when it appears at the bottom of the screen.

There is never a full menu which shows characters which buttons to press in combat but every now and then a special item or cut scene can be triggered with the B. button and a small photo of the item. For example, the Deathstone is often encountered as an on-screen plot icon and selecting it triggers a special event or cutscene. 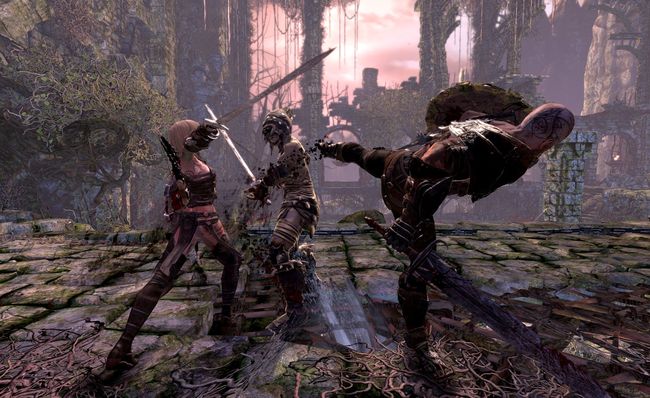 There's a few reasons for why the game's called RPG-lite - The game is not very menu oriented; the shortcuts are typically easy to remember , but they are rarely displayed on the screen. Fortunately, it is fairly simple to switch between weapons, and the X-Y-A-B buttons (on the Xbox, at least) control different styles of swings and attacks, as one might in a fighting game. But some things can be easy to forget -- it's hard to know if you equipped ice arrows or normal arrows because in combat they look the same until you fire them.

However Hunted is still partly a first-person shooter. All ranged combat takes place in this mode, and using certain larger weapons, for example, a ballista, also switches the point-of-view. However, there is very limited auto-targeting or assistance and it feels more like a true FPS than some of the combat in Nintendo titles, like Metroid or Twilight Princess.

Hunted ended up becoming the RPG I was most excited about this year at E3, and it seems perfect for RPG-players with a passing interest in FPSes and FPS-players who want to try something a little different. It will be out in 2011 for the PC, Xbox 360, and PS3. 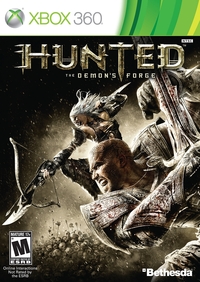