Lufia: Curse of the Sinistrals Preview 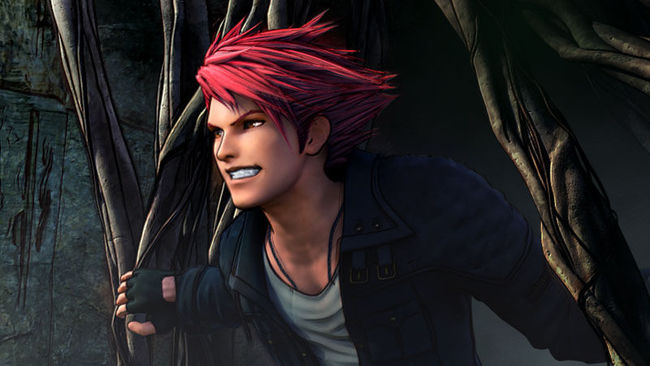 Lufia II has to be one of my all-time favorite games. Everything about the game fascinated me as a child, especially when it came to the overworld navigation and the capsule monster system. To this day, I try to make a assertive effort to beat the game at least once a year to keep that nostalgia alive.

Now, imagine my horror when I found out at the Natsume booth at E3 that this re-imagining to the original game was going to take both of these great features and chuck them out the window. Neverland, what have you done? I understand that you want to make your game much more contemporary with the times, what with your 3D roaming action-adventure stylization, but why did you have to sacrifice the parts that made your 1995 classic (at least in my mind) stand out among the flood of Squaresoft titles? 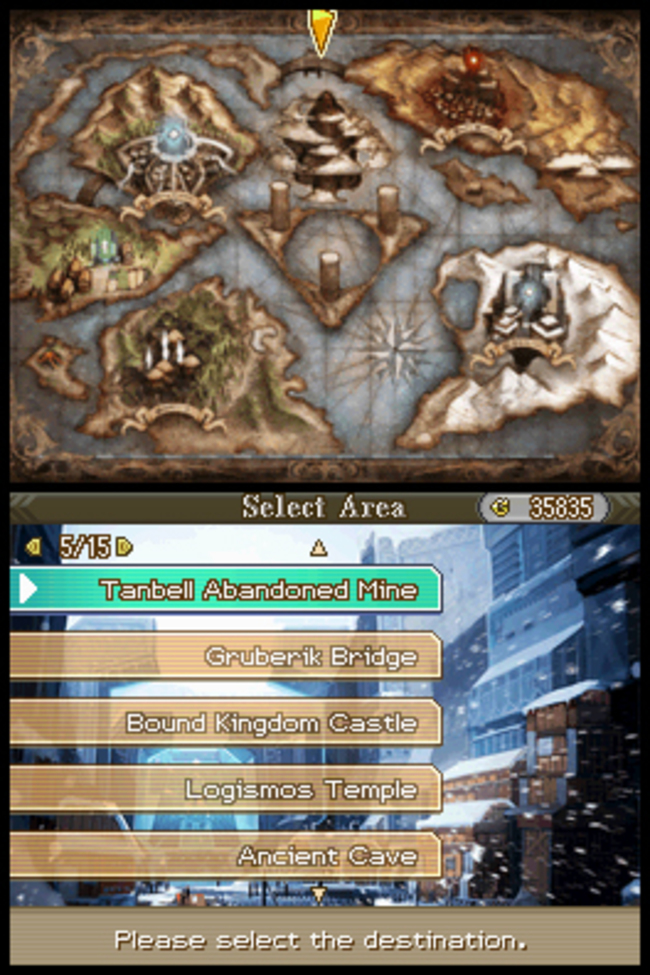 In place of the enjoyable times I had with my airship and being able to drive my boat into a whirlpool to visit the underwater caverns, we instead have a direct navigation screen and a gem-based board system that lets players customize their characters. Think of the latter feature sort of like Final Fantasy XII's License system. Throughout the game, players will come across dozens of gems that can be placed onto the board to increase stats like strength, HP, magic, and more. Just like the License system, all of the characters have their own gem board so you are not able to overlap others, and certain spots allow higher bonuses.

With this new interpretation, the game focuses way more on puzzles than ever before. This includes everything from chucking heavy objects onto switches to open doors to moving pieces around to blowing open doors. Players are also able to switch between any of the 6 returning characters -- Maxim, Selan, Tia, Artea, Dekar, and Lexis -- all from the original game, at any time with a tap of their stylus on the bottom screen. Each have their specific abilities that will help you progress through the story.

During boss battles, combat stretches to both screens, and the only way you can change your party member is through the menu. Each of the party members levels alongside you, so you do not need to constantly switch among them to make sure they are all getting equal attention, nor will you have to worry about being stuck with a severely underdeveloped character at some point in the game. 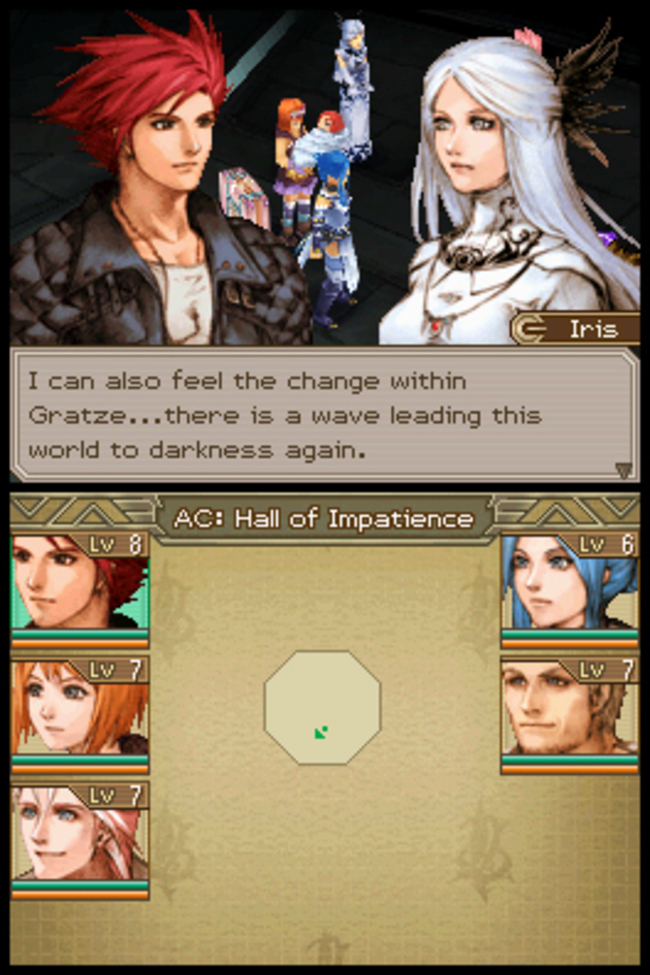 When it comes to the graphics, there is plenty detail to be found when it comes to the environments and the look of characters and enemies. However, things are starting to get a little messy when seen through the Nintendo DS. I can't help but feel that the hardware has became archaic, with the prevalence of jagged lines, the washed out colors and slightly blurry. Don't get me wrong, the game looks as good as any other DS title, but I really hope that the 3DS will do a much better job in the visuals department (and if Kid Icarus is any indication, it certainly will).

The controls are pretty standard fare when it comes to a 3D hack-n-slash title. You can do a regular attack, a special attack, do a dodge roll, and jump (which comes in real handy during environmental traversing, enemy encounters, and puzzle solving).

The soundtrack is simply an updated and remixed version of Lufia II's music, . The game features very little in the way of actual voice acting, with only major plot points being voiced and the sound characters make when they are attacking another. Otherwise, you will be enjoying the hundreds of pages of dialogue that this game will provide you as is of course standard fare with many portable RPGs.

The game will take about 25-40 hours to complete depending on how involved you want to get with the game and its offerings. There will be a New Game + option, but everyone at the booth was not able to answer my question on what exactly will be carried over when you want to experience this. There are 2 endings total, but I am unsure of what exactly triggers one or the other -- I am sure it will be pretty obvious when you are playing the game. 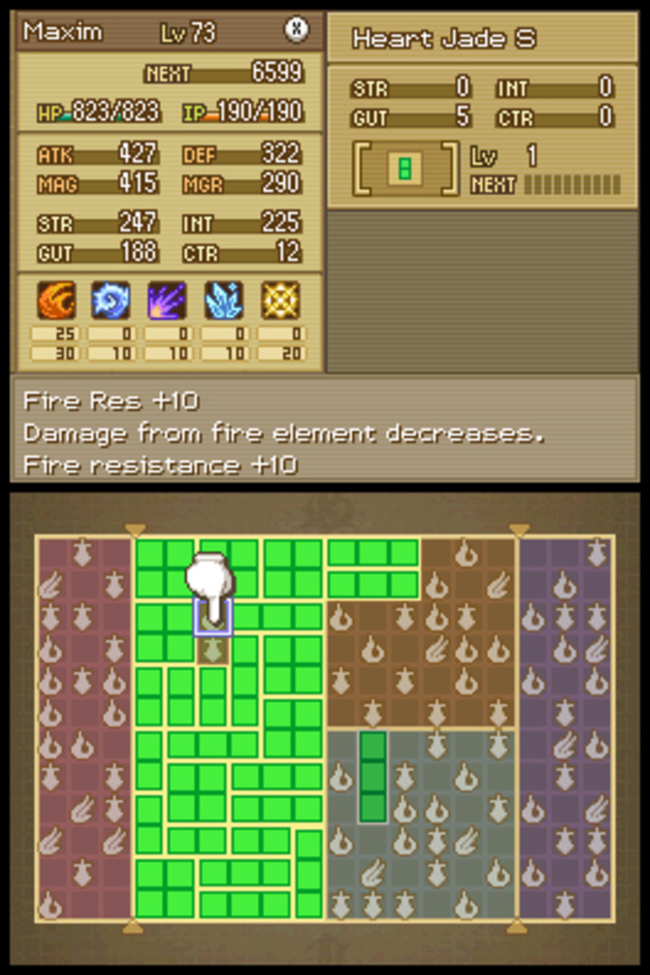 One of the more interesting aspects of the game that had my ears perk up was that during my discussion with one of the staff members at Natsume, is that if you happen to die in the game at any time, you have two options to make. For the more hardcore gamers, one of the choices has you going back to the last checkpoint and start over. However, for the more casual players not looking for a real challenge, you can decide to raise yourself by 5 levels without any penalty.

After hearing this, I kind of stood there a little flabbergasted. I mean, we are talking about an RPG here. The genre was built upon this grinding mentality, something I kind of enjoy doing (does that make me a masochist?). To know that even at the last boss, I can just die a couple times and boom, I'm up by 10 levels, where does the actual challenge lie? I guess that means I will be one of those guys using the first option all the damn time, then, but trying to figure out how the balancing will be able to work is beyond me. I expect those that do utilize this system will be able to beat the game in less than 12 hours rather than the alleged 25+.

But hey, maybe I am supposed to approach this game as if it was an entirely new game. I need to forget that the original ever existed, and if I was a new player walking into his local game store and seeing this title on the shelf. I imagine myself standing in the Nintendo DS section, intrigued by the cover art for Lufia, and see my arm reaching up to grab the case, and take a look at the back of the box.

The thoughts running through my head may go something like this: "Hey, cool! This game offers rich, detailed environments for me to run around in. Wow, this game promises tons of different puzzles to solve in a 3D environment that has me jumping around like a platformer! Whoa, 6 different characters to choose from, all on the fly, and each with their own strengths and weaknesses? That's pretty impressive. And hey, these characters have ridiculous haircuts -- this must have been made in Japan!" 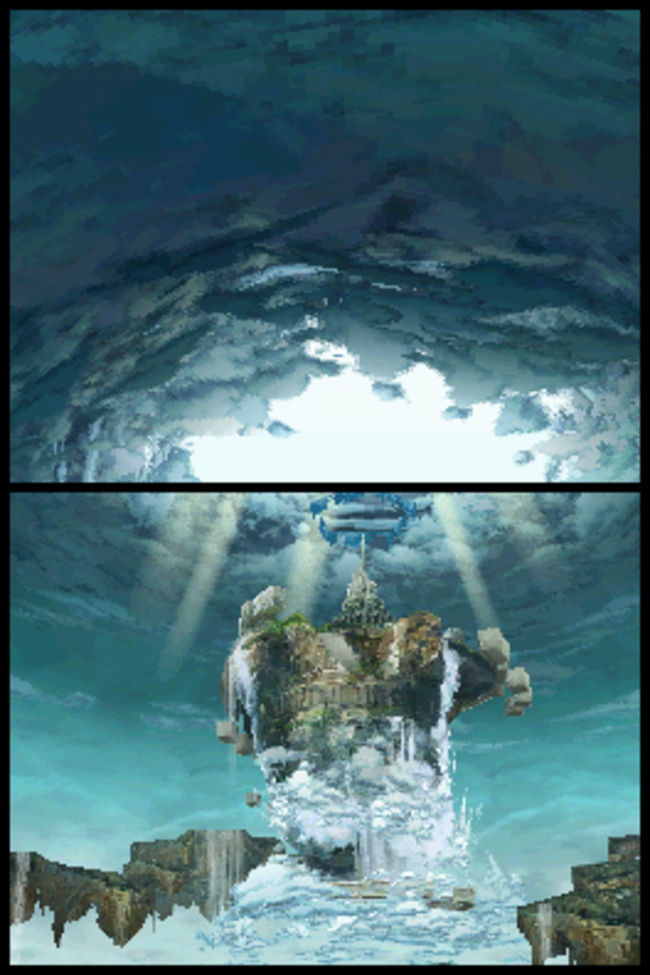 Then I look to the right and see Ys Seven in the PSP section. It is almost the exact same game with the same ability to change party members on the fly, the same 3D puzzle solving, and same game length. But with Ys Seven, Falcom continues to have an item crafting system and progressive dialogue, which Curse of the Sinistrals doesn't have in relation. Heck, one of the more astounding issues I have with this game is that no matter what armor you are wearing or weapon you are carrying, nothing changes on the screen whether you are in town or running around in combat.

What in the world were Square Enix, the originators of character modification, and Neverland, with its strong history of building strong and complex customization systems, thinking when they made this game? I can't help but feel a sense of regression; that they took two steps back when developing this "enhanced re-imagining" of Lufia II.

I understand that with a lot of these changes, it brings a lot more appeal to those that have never really had a chance to play the original game before, but for some reason, I feel a little alienated without having my trusty Foomy! I guess I can shake my fist all I want, but until I get more time with Lufia: Curse of the Sinistrals, I will continue to have this bad taste in my mouth.

The game currently does not have a release date, but is looking to be out on store shelves sometime during the Fall.

AMENDMENT: I have received questions from many readers asking me exactly what I mean by my comment on the article about the new look of Maxim, the protagonist of the story. Well, how about for comparison's sake, let's take a look at the character design for the main cast of the original game, Lufia II, and the contemporary version. Full credit goes to an anonymous user.

As you can plainly see, all it takes is a hop, skip, and a HOLYCRAPLOOKOUT from fantasy to sci-fi. Kinda reminds me of the transition from Final Fantasy 6 to 7, amirite?

Lufia: Curse of the Sinistrals Drops Next Month

Lufia: Curse of the Sinistrals 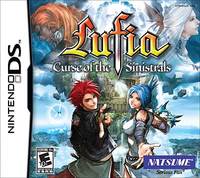