Fable III will look glaringly familiar to anyone who spent a good chunk of time with Fable II - they run on the same engine and sport nearly identical graphical styles - but looks can be deceiving, and the truth of the matter is that Fable III is moving a long way to change up the formula of the series with all-new elements.

Indeed, Lionhead seem to be focused on delivering a game that is very familiar but also remarkably different all at once. Going hands-on with Fable III it's instantly familiar. There's my hero, who controls the same, and there's my dog, who also has the same function.

The combat feels the same in practice, but has been tweaked in vital areas. There's no more multi-coloured orbs to be picked up to gain experience, and magic has been changed up to make it so that by the end of the game you won't just be using one do-all area of effect spell over and over again. Lionhead believe Fable II's 'one button combat' worked, but the rep on hand told us that they're now trying to add extra depth to the system and make it less easily abused by skilled players. 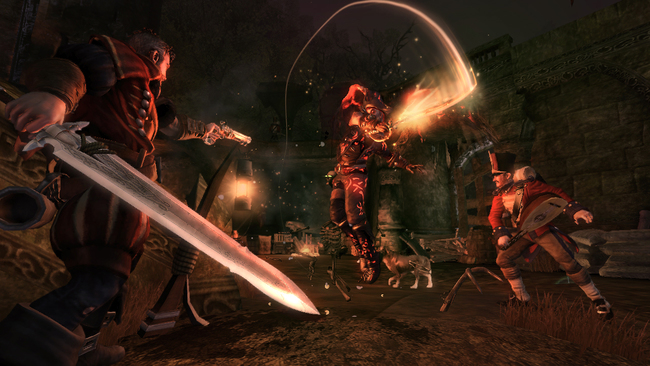 Where Fable III is more different is in the atmosphere. The original Fable took the form of a fairytale, while the second took the series into darker territory - but Fable III aims to show a darker, grittier side of Albion than ever before.

A large part of this is down to the plot - Fable III sees you take control of a young, pampered prince whose brother is king. The King is hated by the people due to his greed and callous attitude to his people, and to cut a very long story short your sheltered prince (or princess) will make the decision to overthrow him.

That isn't the entire game, of course - there's the road to the throne and then stuff beyond that, we are assured. Players will actually get to rule Albion, but for the part of the game when you're trying to overthrow the king you'll find yourself facing more difficult moral choices than in Fable II and seeing nastier stuff in general around the world.

King Logan rules with an iron fist, you see, and people are being executed for the smallest of misdemeanours, while children work away in factories in this industrial revolution take on Albion which is set some fifty years after Fable II.

The dark setting goes a long way to change the attitude of Fable, and while that light-hearted Monty Python-like humour is still there - you can still fart on someone, for instance - everything takes places against a much darker, more sombre, macabre background and setting. Albion is a country in turmoil, and seeing it and its peoples in such a state is sure to get some players a little more fired up to take down the King. 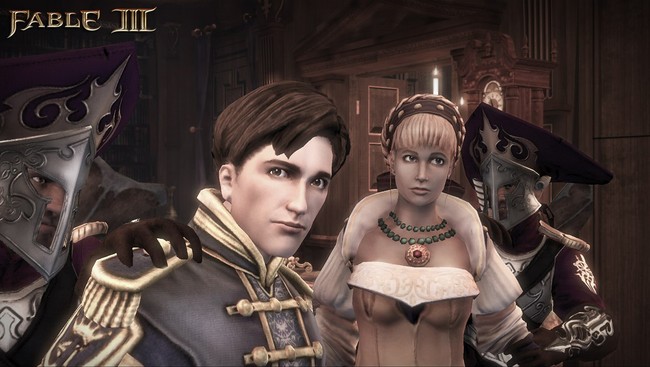 When you eventually do, the promise is that the moral choices you make as king will then have over-arching repercussions for the entire kingdom. While you can still then be a dictator yourself, the choice is yours, and Lionhead tell us they hope that the journey through the Kingdom to liberate it will make some players think twice about being an even more evil King.

One of the most talked about changes in Fable III is the ditching of the basic interactions system for the 'touch' system. Instead of a 'wheel' with different actions on, like farting and threatening other characters, you can touch other characters with yours, which will then give you context sensitive options.

You may hold hands with someone who likes you while you might roughly drag someone who doesn't by the arm against their will - and actions will then appear while you're holding them. Dragging someone I didn't like, I was given the option to hit the X button to fart on them - and so I did. That's Fable, alright.

The biggest criticism I had about Fable II when I reviewed it was the menu system, which was, frankly, a bit of a pig. Lionhead clearly took this on board - they haven't just overhauled the menu system - they've done away with it entirely. Now, when you press start, you'll end up in a customized room.

The easiest way to explain this is to draw an analogy to The Matrix, when they enter the 'construct' - the plain white room - before they hit the actual Matrix. What happens in Fable is similar - pressing start makes your surroundings disappear, and you'll end up in a private room where there are no enemies or NPCs to bother you other than your trusty butler Jasper, voiced by John Cleese. 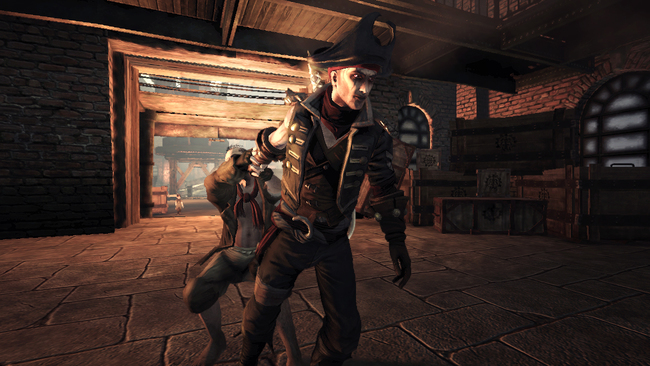 Within that little construct there are a few different rooms, and all of them serve a different purpose. If you want to change clothes you head to the wardrobe, where available outfits now sit on mannequins - no menu required to change clothes. Changing weapon is similar - epic statues hold your swords for you to see, while a simple contextual box pops up to let you know the weapon's stats when you look at it. It's a very cool system, and it works.

As well as all that, there's a map in the middle of the room which can be used to fast travel, seek out quests and, later on, control rudimentary kingdom decisions (like rent on houses) without having to travel there like in Fable II.

This 'menu' system is really, really cool, though I did find myself wondering if I'd get tired of talking to the wardrobe every time I want to change clothes. That said, it's a ten second journey - how lazy am I? It should be fine, but we'll see if this new system begins to grate once the game hits. Anything is better than the Fable II menu, after all.

Even your progress is shown in a similar way, on the 'road to rule' - a vision that tracks your progress towards becoming king. Overseen by Theresa, the mysterious blind seer from Fable II, it's a misty road with various branching paths along it. It doubles up as both a progress tracker and your character progression, as which paths you take down the road will determine what unlocks you get from it - ranging from combat bonuses to new out-of-combat abilities.

Rather than just having a menu for these things, Fable III again strips that stuff away and replaces it with something you can walk around and interact with. There were echoes of this in Fable II, but Lionhead insist that they've learned from the experience. As an example, the rep cites Fable II's cutscenes, which allowed you to move around in them but were sterile. They've been switched out for traditional, cinematic cutscenes this time.

What I played of Fable III felt reassuringly familiar but also seemed to have tweaked and changed enough to make it an interesting, fresh experience - and hopefully one that is even more enjoyable than Fable II. There's been no crazy, outlandish promises with this one - so all Lionhead have to do is deliver a good game.

The controls and combat play out much like they did in the rightly popular Fable II, so all that stuff gets a thumbs up, and the all-new menus system and the in-game presentation in general is a very cool take on how to make menus fun - though it'll be interesting to see if they're still fun after 20 hours of gameplay.

I definitely can't wait to see how all these different elements Lionhead let me play with at GamesCom play out in the final game, and you guys don't have too long to wait now until I deliver my verdict on the final experience. Fable III is due out at the end of October, and we'll have our review up some time shortly before release.