A charismatic speaker, Molyneux is already getting laughs from the assembled group, who are tired and bedraggled after a nine-hour day at E3. Yet somehow, he can electrify the audience and draw out smiles that have struggled to form for most of the day.

We’re here to see Fable: The Journey, and Peter’s upset about how the on-stage demo of the new title at the Microsoft Press Conference has been received. “We really wanted to craft a demo for on-stage which kind of showed how amazing the magic was, and how amazing the world of Fable: The Journey was, but we started thinking we were gonna have eight minutes, then that was squeezed down to four.”

“A lot of people wrote ‘oh, this is Fable on rails’ – it’s not on rails – absolutely, it’s not on rails – I promise you that. The first thing we did for Fable: The Journey was write one word on the wall – and that word was freedom.” There’s a demo set up and ready to go, and Molyneux is gesturing to it. “I’m going to try and prove to you today that actually freedom is what we’re giving you, and it is more freedom than any other Fable game has given you before.”

“Freedom isn’t just about being able to go anywhere – it’s more than that.” With that, he had the demo turned on. Another Lionhead rep was manning the Xbox 360 while Molyneux guided us through the game verbally, encouraging us to both watch the rep playing as well as him and the screen.

“We’re trying to tell a story, and this is a long story we’re gonna tell you – and for that you have to be comfortable.” The Lionhead rep sure looks comfy on Microsoft’s posh-looking sofa, but they’re talking about gameplay here. It was the pursuit of comfort that led to horse and carriage as the primary mode of transport in the game.

“You can move around without using your feet,” he explains, gesturing to the demo that’s now taking place. The point of this is that it can be played sitting without the need to get up and move around. It gives players an easy way to have freedom in the world of Albion, Molyneux says. The horse can be directed anywhere on screen that you like, and it’s controlled simply by using motions one would with a real horse – flicking the reins gently or more violently.

This allows you to move around in what Molyneux describes as a “completely natural way.” You can be subtle, gently tapping the back of the horse or you can be more violent with it. Voice commands also play in – you can teach the horse commands and then instruct it with your own voice. It’s all very Fable. 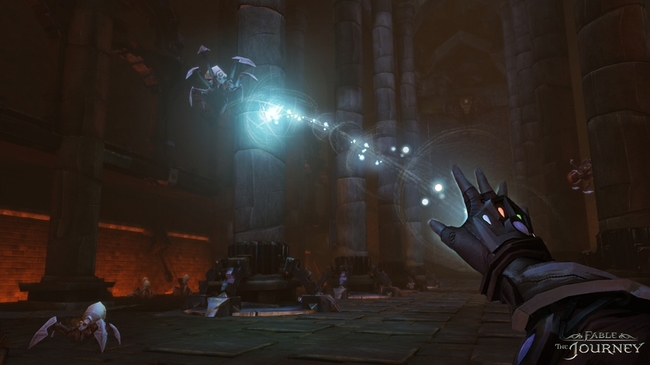 The Fable style features don’t end there. The horse, of course, is intended to be something you can become emotionally attached to. “Think of it as a cross between the dog from Fable II and the creatures from Black & White.”

The horse thinks, and feels. If you’re the type of gamer who wants to rush through the game or speed-run it, you’ll have to thrash your horse – work it hard and then, worse, take out your whip and beat it when it becomes tired to keep it moving. “You’ll really have to whip him,” he says with a clear enthusiasm for the idea, animatedly making a whipping gesture. “Cause him pain! How many people here would want to do that?”

That’s only an option, though. You can take it slow if you want, but the result might mean more difficult battles or riding closer to death and danger if you’re not willing to push your horse – but the idea of the freedom Lionhead want to achieve is that you can stop at any time and get off your horse. You can even spend time grooming and caring for your horse should you wish.

There’s extra paths and trails to take across the land that aren’t required for the main critical story path, and there’s over 300 miles worth of roads and land to cover through the game. “In the mountains here you can take safe paths, rocky paths – it’s all about freedom,” Molyneux reiterates. He’s trying to make it quite, quite clear that it’s not on rails.

That’s the travelling around - but what about the combat? The key, Molyneux explains, is that the game will never tell you exactly how to cast with the magic system – it leaves it almost entirely to the interpretation of the player. “All we say is if you raise your hand up, you’re in control of magic.” You can cast lazily, with a beer in one hand, sitting back, or you can cast in an animated fashion, raising both hands up and hurling spells at enemies.

The game takes all this into account, too. You can absolutely get through the game using just one hand lazily, but the spells you sling will be weaker and less potent as a result. Two hands will result in a more powerful spell. Holding a spell back and charging it will make it more powerful still, and pushing both hands together can combine and mix spells together in cool ways.

Spells can be flung at enemies using auto-targeting – cast towards the middle of the screen and the spell will lock onto the nearest enemy and hit them. You can also cast spells off at wider angles, and when you do the auto targeting is broken – you can then use your hands like a mage to guide your spell in 3D space. In theory, this would allow a skilled player to loop a spell behind a shielded enemy and then pull it back to catch them in the rear.

“This gives you total flexibility of casting whatever you make wherever you like,” Molyneux explains – “Again, it’s all about freedom.”

There are some really cool touches to casting spells, like the ability to charge huge fireballs up and then throw them to take out large groups of enemies. It’s not all ethereal balls of light and fire, though – you can also create items with magic.

The chap conducting the live demo somehow creates a spear of light with his gestures, and then he takes a hold of it by reaching out to it in 3D space and grabbing it. Now holding this javelin of magic energy, he slings it up at an enemy in a tower – and he’s speared with it. It looks cool as hell, though exactly how the gestures he used worked wasn’t clear during the demo. 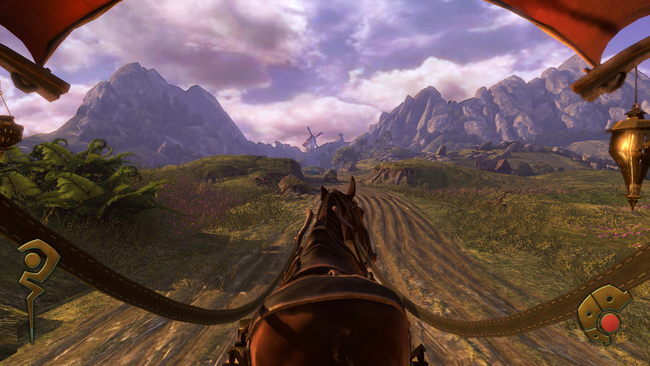 Molyneux closes the demo by explaining what he thinks Fable: The Journey is. For a start, it’s a journey that allows you to see Albion in a light you’ve never seen it in before. It won’t all be roads and pathways, he says – there’ll be open plains, mountains, coasts and more.

It’s also intended to be a journey that provides the first major story-driven Kinect experience full of memorable moments. There’ll also be plenty of RPG loot opportunities and customization of your wagon, horse and character as well as traditional RPG levelling up which is all based around powering up your magic powers and unlocking new abilities.

The Fable: The Journey demo at the Microsoft Press Conference didn’t do a great job of explaining any of this to us – at the end, we were left wondering if the game was even still an RPG. Turns out, it is. Interviewing Molyneux later, he went into more detail on how he believes the game is definitely an RPG.

“Definitely it’s a role-playing game – there’s people to meet, lots of levels to go up, there’s a sense of freedom and exploration or anything you care to throw at me about a role playing game – it’s definitely there.”

Well, that’s that, then. The presentation we saw for Fable: The Journey definitely rescued our initial opinion of the game from the Microsoft Press Conference. Look for more coverage on Fable: The Journey, which launches in 2012, on RPG Site going forward.

Remember you can check out all the Screenshots, Artwork and Videos of Fable: The Journey over in the Media Vault! 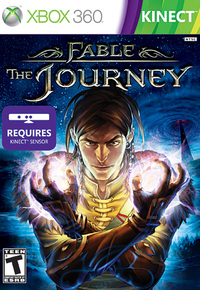