With the amount of companies taking a run at online game streaming services, from OnLive to PlayStation Now, it's clear that investors and company bosses believe the Netflix model can be successfully applied to games. One of the latest companies to get involved is Square Enix with the announcement of 'DiveIn', a service that allows Japanese gamers to stream versions of some of their most popular games to smartphones and tablets.

The concept is pretty simple, in that it'll allow players to take big-name hits such as Final Fantasy XIII, VII, Murdered: Soul Suspect and The Last Remnant on the go - and that's just the start. The service will offer rentals in various tiers, including three days, a month, and a full year.

While it's always difficult to know just how much of a demo of a streaming service on the floor of a show such as Tokyo Game Show or E3 is trickery, DiveIn performed fairly admirably when I tried it out. One of the advantages leant to some of Square's back catalog is lag being less of an issue - in a turn-based battle system, twitch reactions and control lag of course matters a lot less. 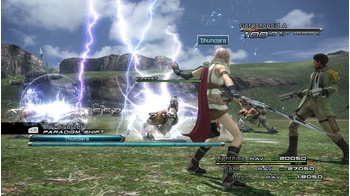 Divisive as it may be to some, the idea of a game as big as FF13 on a phone is pretty cool.
There was a noticeable but fairly minor bit of input lag on button presses, but the bigger part of DiveIn's current problem is that it doesn't appear to be significantly retooling the games it uses for the service. This means that Final Fantasy VII, which was of course the title I most quickly gravitated to, was to be navigated with sloppy, ineffective on-screen controls.

Where it'd make sense to add touch-based control to the game's iconic blue menus, there is none, and everything must be browsed exactly as it was on PS1 - this is the recent PC re-release running on a machine from afar.

The same ends up true of Final Fantasy XIII - though proper touch controls would admittedly be much more difficult to implement there - and my take-away from my brief time with DiveIn was that this is the problem that Square Enix most needs to solve if the service is to be a success. A better on-screen controller alone would help a great deal, as the one on offer in the TGS demo left a lot to be desired.

The games look great when taken into consideration that they are streaming live, proving that the server infrastructure and streaming technology is sound. The slight input lag, while unfortunate, was minor - and may not even exist outside of the environment of a WiFi-soaked convention center. Simply put, it works.

With games like Final Fantasy VII, VIII, XIII, XIII-2, Lightning Returns, Murdered: Soul Suspect, Season of Mystery: The Cherry Blossom Murders and The Last Remnant coming, there's a decent set of software there to back up DiveIn - if only they can be adjusted to be properly intuitive to control.