We’ve interviewed Final Fantasy XIV: A Realm Reborn’s producer and director Naoki Yoshida on countless occasions over the years, as many of you know. Following years of rebuilding, patching and finally re-launching to resounding success in 2013, Yoshida is finally now ready to fully reveal the game’s first full-fledged expansion in Heavensward – a release that promises to be Square Enix’s biggest of the year.

We caught up with Yoshida at GDC this past week to discuss all things expansion in time for the game’s latest media tour. Following a brief recap of things known and a little new, we had a chance to pick the brain of the producer/director as he shared his thoughts on what players can expect from the new job classes, potential balance updates and more.

As we heard last year, Heavensward aims to tell a new side of Eorzea’s story – venturing into the land of Ishgard and its many secrets surrounding the 1,000 year Dragonsong War. Not only will players have the ability to explore massive new zones, but now they’ll be taking to the sky – heading to floating continents by aid of flying mounts such as the black chocobo or personal airship.

Heavensward will also see the introduction of the game’s next high-end raid dungeon with Alexander along with new Job classes that will likely be at the top of everybody’s list of things to explore as they theorize the potential each brings to a group. The development team agrees – after all the effort expended to create each one takes about a year from concept to completion, and that’s no small feat.

According to Yoshida, each job is picked under close consideration of gameplay and party play. For each role, brainstorming begins for actions, the creation of animation and effects, then job quests, cutscenes, weapons and armor are drafted.

From there, the role must be differentiated from its peers. For example, Paladins are shield tanks while Warriors are seen as more active so how do they differentiate Dark Knight? The team then considers player feedback while designing the theme of the job. Until the last minute they actually considered Samurai instead of Dark Knight for the tank class, however, they decided against it because they’d introduced Ninja with those similar Far Eastern elements already.

The last two steps involve the creation and design of job actions as well as a visible weapon. Yoshida explained that weapons need to be visible so that players can show off their well-earned loot. For example, the Astrologian class uses a deck of cards so the team worked on the way characters draw cards as well as holster position.

The art team also had to work toward making guns exciting to look at with the Machinist’s arm with attachments such as the magazine clips, scopes and the addition of a mechanical turret. In truth the turret will prove very important for Machinist as they’ll be there to buff not only yourself, but your party and the option will be there for enemy debuffs too.

But where will Machinist fit into end game content when Bards have become almost a necessity due to their regen buffs? Why would a group ever want to bring a Machinist? “It’s not the same,” said Yoshida. “The turret can be used to buff self DPS and there is also different attachments to the gun to customize the character. We don’t have a desire to make something similar to what we’ve already made.”

The addition of the Astrologian job brings the game total to three healers – in addition to Scholar and White Mage. The current setup allows for a greater form of Protect from the latter, but according to Yoshida that shouldn’t really matter too much. “Two Scholars can increase DPS so maybe that is an advantage over not bringing a White Mage,” he explained. “We’ll also be balancing the Astrologian similar to that, having some pluses and minuses for each job for balance.

“World first players might have a different perspective to class balance and this might cause some players to distance themselves away from some jobs. However, the goal of balance for us is so that all jobs can be balanced and used and players can have fun with the job they want to play. We want people to explore different jobs because they are different.”

The inclusion of a third tank with Dark Knight also poses some interesting possibilities for players. While Yoshida remains mum on what the class actually does in detail, we do know the job is a bit flashier than its contemporaries, relying on black magicks. The class can be switched to be more like a Paladin or Warrior, however, he stresses that it will operate in a new way. “I won’t say it will be similar to [Paladin or Warrior] either. Just like how Astrologian will play different compared to the current healers, there will be new mechanics introduced, just like how Ninja has the Mudra.”

With new jobs comes a concern about group balance – in particular with XIV’s end-game raids. Currently, a wealth of content is designed in a way that it’s ideal to take along one of each type of tank, healer, a Bard and in some cases a Monk – like with the Final Coil of Bahamut Turn 13. This, of course, sometimes shuts out certain jobs from being taken along but Yoshida admits the goal is entirely opposite.

“There is a balance we aim for,” he explained. “But players tend to choose differently. I can’t go into much detail yet as we’re still in development and if I do people might consider their current class being obsolete. For example, in the Final Coil of Bahamut people considered some classes favored over others when they wanted to clear content fast, but it is possible to use most DPS compositions to complete the content. It might not be as fast as some but players are sensitive to these aspects.

“It’s a delicate issue and we don’t want to mislead players before it’s finalized.”

“With there still being some time before release, we will think about these problems seriously. We don’t want to cause confusion at this stage and once the expansion is released, players can test a lot of these things for themselves.”

The other issue that has become a common player complaint revolves around the way the game handles loot drops. The current system relies on Random Number Generators and a loot table filled to the brim with ill odds stacked against most players trying to eke out a specific piece of gear. Many players have hopes that Heavensward will change things for the better – possibly to a token-based system. The word from Yoshida is reassuring: It sounds like things are in the works.

“It’s in the making, but not finalized,” he said. “There are changes coming to satisfy the player and to move away from actual item drop to something that matches the job and role in the party. We’re not sure if a full tokenized system will be in use – it’s a delicate issue and we don’t want to mislead players before it’s finalized.”

For those who’d rather not dabble in raids, however, or just enjoy the typical MMO grind need not worry. Heavensward will have new relic weapons alongside the level increase to 60 which – according to Yoshida – won’t be nearly as difficult to obtain as the current Zodiac weapon line. The new relic will likely also see something around the timing of Patch 3.1 to increase its power – similar to the current Zodiac. “However, the Zodiac weapon is still for whoever wants to use it,” said Yoshida. “The players do have choices of other weapons that might be easier to obtain than others.”

Final Fantasy XIV: Heavensward is set to launch on June 23 across PC, PlayStation 3 and PlayStation 4. A Mac version is also in the works as well as support for DirectX 11. 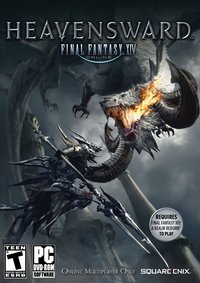