It's probably fair to say that Nintendo's E3 2015 Digital Event had a few strange fake-outs. A new Metroid Prime turned out to be a multiplayer-focused title with Samus entirely absent, and after something clearly Zelda-themed debuted, it became clear that this new title, The Legend of Zelda: Triforce Heroes, is also rather similar to that concept.

After the success of the rather brilliant A Link Between Worlds, Nintendo clearly wanted to do something different. The result is Triforce Heroes, a Zelda spin-off that seems to borrow heavily from both the aforementioned title and Four Swords Adventures - this time banding three different versions of Link controlled by three different players together for puzzle-focused adventures.

Rather than competitive as Four Swords occasionally was, Triforce Heroes is entirely focused on the co-operative - right down to the three players sharing life hearts. Taking a hit has an impact on the whole team, as does collecting new hearts to replenish health. If one of you fails, you all fail.

All-new to the series is the 'totem' mechanic, which does exactly what you'd expect something of that name to - one Link picks up another, and if the third Link does the same you can have a three-storey stack of Links plodding about the dungeon. The bottom Link controls walking, and whichever is on the top has no movement control but full access to their weaponry. It's a strange feeling, but you definitely get used to it.

Forest, the first dungeon we play, leans into teaching this mechanic in particular. Switches are regularly placed on top of tall plinths that are otherwise unreachable, and the boss of the dungeon - a giant version of the classic Chu Zelda enemy - has multi-tiered weak points that can only be hit by toteming up then having higher-up Links use their bow.

The Totem is just one mechanic, and traditional Zelda puzzle solving also plays into the co-operative mechanics and weapons in other interesting ways.

At one point our team needed to cross a huge pit - and there seemed to be no typical way across. The solution was all based around the unique weapons we'd picked up - one Link had access to a gust-blowing device that was used to blow the other two Links over the pit to safety. To bring him across at last, the Link with the boomerang hooked him with it and grabbed him over the gap.

Other solutions might involve one player placing their bombs and another player using their weapon of choice to shift it to a key location. Ammo and the like is no concern, with A Link Between Worlds' stamina-based weapon usage making a welcome return.

So far so Zelda, right? The puzzles and feel of the game are most familiar - Just now, there's three players.

Other cute Nintendo touches ensure that even players less vocal than us - we did a lot of shouting at each other - will be able to communicate.

Eight buttons at the bottom of the touch screen allow you to convey basic emotions and instructions with cute little Link emotes - celebrating, calling an ally over, asking them to use their item or make a totem - or of course expressing frustration or disappointment are all present. Also displayed is key information about your allys, including what weapon they have at their disposal.

The demo we played did a great deal to kill my skepticism about the concept of the game - we had great fun with Triforce Heroes, the three of us shouting out instructions to each other, getting frustrated, and at one point deliberately killing each other. It scratches that classic Nintendo itch in that it's just damn good fun.

The worry with Triforce Heroes sits with the execution - the core of the game is three-player only, with puzzles devised that way. If there's two of you, it's as useless as one, opening up only a competitive arena mode to you. Worse, if somebody drops out - that's a game over.

It seems cruel and limiting to the value of the package - and though we're told there will be some single-player component, Nintendo wasn't ready to talk about how that'll work at E3.

Triforce Heroes is sheduled for the back end of the year, so Nintendo has time to smooth out those issues. The important thing is that the core of the game was pretty great fun, giving our crew a much-needed break to yell excitedly at each other during the middle of E3. This is one we're going to watch with interest. 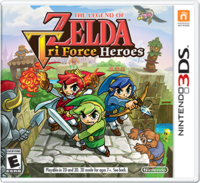