Choose your own adventure in Stories: The Path of Destinies

I had the pleasure of checking out Stories: The Path of Destinies at this year’s PlayStation Experience. I came into the hands-on session not knowing much of the game outside of the trailers that I had seen, but my curiosity was already piqued from the design alone.

I sat down to talk about Stories with Malik Boukhira of Spearhead Games, who was the game designer on Assassin’s Creed 2 and Dead Space 3. During my twenty minute session with the game I got to learn a lot about what makes Stories such an interesting experience that hinges on player choice. 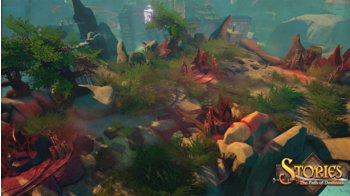 The striking level design gives the a game a lot of its character.
The storybook tale tells the story of Reynardo, a rogue fox who is leading a rebellion to fight against an evil empire that is about to crush the freedom the world once had. To help him on his journey, Reynardo comes into possession of a magic book that allows him to go back in time to trial and error his way through the adventure.

The brilliant thing about Stories is that there comes a point in the game where you are going to have to make some tough decisions. The choices the player makes causes the story to branch out, and those branching storylines continue to branch over and over until you reach one of many endings.

Choices actually matter in this game, and it allows a healthy amount of replayability for those interested in seeing every plot thread all the way through. These decisions can lead to entirely different stories and themes - whether that’s romance, comedy, or tragedy, hence the game’s title. Even the maps themselves have different paths you can explore.

And you don’t have to concern yourself with losing all of your possessions after beating the game, as weapons, skills, items - basically your entire progression carries over. But it won’t be a cakewalk as the difficulty ramps up with each sequential playthrough, and there will only be one save slot to ensure this happens. There is even a few quips that the narration makes making it sound like Reynardo remembers being there before. 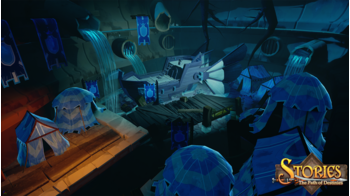 A single level can contain different environments.
The choices that our fox friend makes helps define him as a character. Is he the type of person who trusts his friends and goes for the moral high ground, or does he go for the quick and easy way out that may wind up being the most violent solution to the problem?

The combat featured in Stories is not unlike what you would find in a modern action game: as an enemy goes to attack, they give a tell that forces the player to act. By parrying an enemy’s attack at the right moment, time will slow down allowing Reynardo to either dash to another enemy and set up a combo, or avoid a battle entirely in order to recover.

Aside from that, Reynardo can unlock more abilities to use in and out of combat such as a dashing maneuver not unlike Sega’s Shinobi character but here he actually causes damage. There is also a grappling hook to grab onto nearby objects or even enemies to drag them closer.

There is also a crafting system. By gathering different materials either out in the field or from enemies, one can upgrade Reynardo’s weapons that he has at his disposal.

Stories: The Path of Destinies looks fantastic. The world is vibrant, supplemented with fluid combat; tons of upgrades to unlock; and an intriguing narrative filled with amazing illustrations that is sure to keep a player’s attention as it weaves its fable. Make sure to keep an eye on the game as it is set to be released on the PlayStation 4 and PC sometime early next year.

Stories: The Path of Destinies Review

Monster Hunter Stories - 'Day in the Life of a Rider' Trailer

Stories: The Path of Destinies 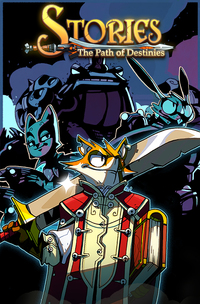 Project Witchstone
Path Of Exile
Path of Exile 2
The Lord of the Rings: The White Council
Signs of the Sojourner