Kingdom Hearts III is shaping up to be something pretty special. Sure, it had an arguably frustratingly long development cycle, but after playing the game for an hour and a half it really feels like that wait is going to turn out to be completely worth it in the end, with KH3 feeling like a properly special expansion of some of the ideas that made the series so popular to begin with.

There's a lot about the KH3 hands-on that stands out and made me excited, so I figured I'd break down my top five reasons my KH3 hype is now building into an article. So - here are the five things I took away from my hands-on session with Kingdom Hearts 3. Many questions remain about the game, but E3 is only a couple of weeks away... 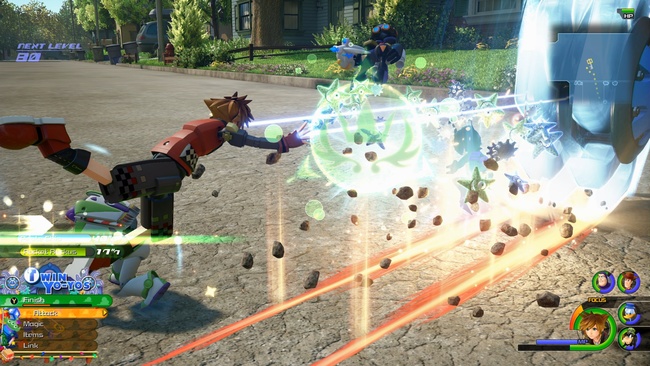 This might seem an obvious suggestion, but it still took me a little by surprise in my hands-on: the combat of Kingdom Hearts III is a proper evolution of the rest of the series, bringing in concepts from every other game to give Sora a much more diverse move set.

That means you have the combat basics that debuted in the first KH, the quick time event style reactions from KH2, plus the features like far more freedom of movement and transforming keyblades from the handheld spin-off games. Sora moves more quickly, jumps higher and generally is far wilder than ever before, something which turns him into a sort of made, energetic catherine wheel of death that turns much of the battlefield into a blur of neon and particle effects.

The transforming keyblades are the real star of combat here, with the player able to switch between different keyblades on he fly mid-combo with a simple button press. That means you can switch from a Tangled-themed Keyblade to a Monsters Inc themed one, for instance, and both are quite different in terms of what they do and how they handle - especially where transformations are concerned.

The Monsters Inc keyblade can ultimately turn into a set of Yo-Yos that have a unqiue move set that sees Sora extending them out to enemies in order to ensnare them before pushing in closer. The Tangled keyblade can transform into a magic wand style weapon, completely changing Sora's move set to a more mage-like, ranged onslaught. Once keyblades are transformed you can switch away and then switch back to them, meaning that in this example you totally could combo some yo-yo action into a magic staff onslaught. It's cool stuff. 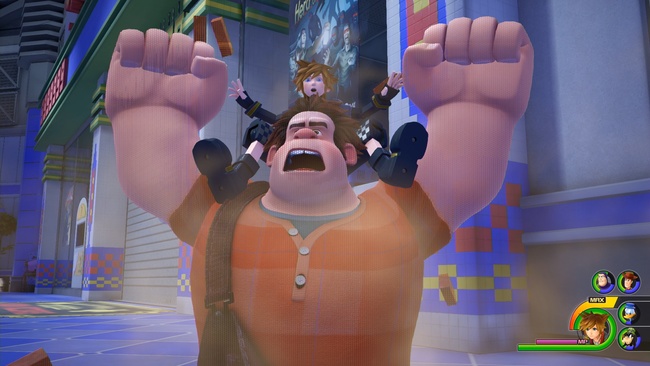 Special Attacks and Summons are way more than a flashy cinematic

In Kingdom Hearts III, all of the special attacks and summons and the like are far more interactive than the trailers might have you expect - and that serves with the above point to make this the most consistently interesting combat in the series to date.

For a start, there's just many more unique actions do in combat. Some will be specific to worlds, certain party members or even certain loactions, like an attack where Buzz, Woody and Sora hop atop a toy rocket and ride it around the battlefield. It feels like in the past this would've been hands-off - trigger the attack, watch the rocket blast off and explode, done - but in KH3 you actually briefly control the rocket, wrangling it around the battlefield before triggering its finisher.

The same is true for other attacks - the Pirate Ship and Teacups Disney theme park inspired rides have direct control, for instance, while another special attack and special mechs you can hop into as part of the Toy Story world all have entirely unique first person shooter style controls and combat - something unexpected that completely turns what Kingdom Hearts is and what it feels like on its head.

The mechs are particularly satisfying - you can hop in and out of them with a single button, and with three different types of mech each with unique abilities you're encouraged to do so in between your regular keyblade-wielding encounters.

Summons are the same too, now known as Link attacks. A Link with The Little Mermaid's Ariel lets you control her, diving and re-emerging around enemies before triggering a finisher, while Wreck it Ralph's titular hero lets you build walls and trap enemies in place before wrecking them by demolishing the walls with a single devastating blow. It's great stuff. 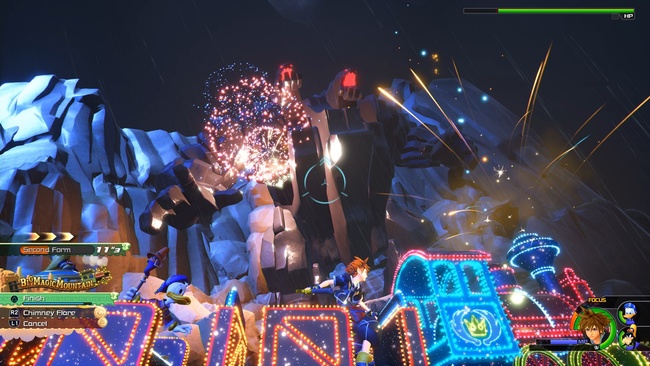 One of the areas where Kingdom Hearts III most impresses, as touched on above, is how seamless everything feels. In some cases this is obvious and perhaps more expected in this day and age, like how the camera pulls back and the game instantly transfers from story sequences to the actual game - though given how insanely close to the movies the Toy Story scenes look, this is still a little startling.

Better, however, is how seamless everything is in battle, as described above. Triggering special attacks after building up combos, summoning link characters and taking control of unique elements of a given area like the mechs in the toy store or the ball that you can ride around in Andy's room - it all has a fluidity and smoothness to it that makes the whole experience feel incredibly slick.

This goes a good way to mitigate some of the iffier elements of KH3 as it currently stands such as a sometimes difficult camera and lock on system, because for the most part its various combat elements and gimmicks flow together in a way that feels natural and fun, and it's this rather than just the mere existence of those different features that really makes KH3's combat experience far superior to previous games in the series. 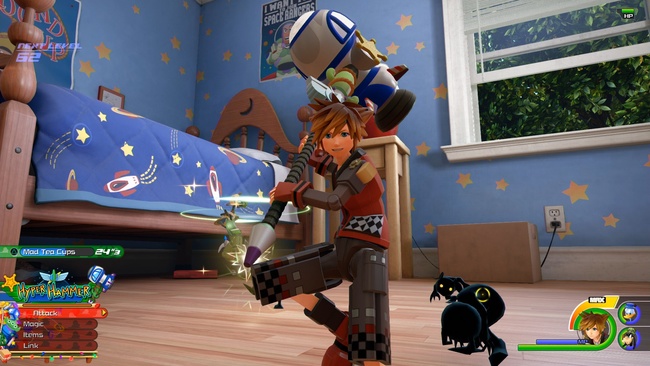 The Music is absolutely mindblowing

It's hardly a surprise, but Yoko Shimomura's work on KH3 seems to be absolutely mind-bogglingly good so far. There's a solid mixture of all-new pieces and rearrangements of classic pieces from the series, and the way music is used around some of the special attacks is particularly cool.

So, yes - expect a bit of an 8-bit fanfare when you summon Ralph, and when you get to battle against and in the Gigas mechs in the toy store expect to hear a Kingdom Hearts classic remixed with a electronic mech-driving vibe. It's all top stuff.

Shimomura's work on Final Fantasy XV was also stellar, but that was a game with a more serious, grounded tone. KH3 is as whimsical and sweet as ever, and it really seems as though the lengthy wait since the last KH games has given Shimomura time to build up ideas and energy that's now being poured into what is sure to be a tremendous soundtrack 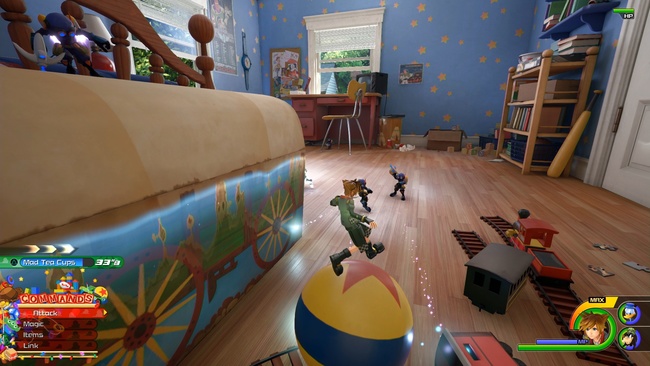 The attention to detail is off the charts

The attention to detail on display in the Toy Story world is something else. Andy's house and the street outside are accurate-looking recreations of the world as seen in the movie, but once you get to a new location, the toy store, it's clear the developers of KH3 let their imaginations run wild.

Pixar staff explained that they challenged Square Enix to think about toys they loved growing up for the KH3 toy store section, and the end result was Square Enix dropping a little touch of Japan into the toy store. In a way the Gigas resemble Gundam and other Japanese giant robot toys, of course, but then there are also mid-boss enemies that resemble and are even referred to as Kaiju in the English language localization of the game.

The toy store also features a Dissidia Final Fantasy NT display where that game's models of the likes of Ifrit, Odin, Shiva and Ramuh are represented as in-universe toys - so, y'know, Final Fantasy now exists in the Toy Story universe. That's a sort of canon.

A lot of things can be interacted with even if they're relatively minor. The iconic design toy ball found in Andy's room can be jumped on and rolled around on. Squeaky toy frogs can be bounced on and used like a trampoline. A balloon-inflating stand has a helium tank attached - and if you smash it with your keyblade gas will leak and cause Sora and company's voices to soar. Little nods like this are everywhere, and if this level of detail is in every world, KH3 will be a joy to slowly explore.