Between taking advantage of industry hours to play the public facing Monster Hunter World: Iceborne demo and our own allotted 1 hour timeslot for gameplay behind closed doors at Capcom's E3 booth - I managed to get a nice good feel for how Iceborne's new and returning monsters, and new mechanics, bring to the Monster Hunter World formula. For those new to the party - the main changes with Monster Hunter World: Iceborne are a bunch of new and returning monsters, such as fan favorites Tigrex and Nargacuga, as well as a new frozen biome called the Hoarfrost Reach and a new gameplay mechanic called the Clutch Claw, which acts as something akin to an expansion of the Slinger introduced in the basegame.

For our demo purposes - and it turned out that both the public facing and private demo were essentially the same - we got to tackle 3 hunts against the Tigrex (1 with the public which we failed, one that was cut short near the end due to a power outage, and one where we finally successfully felled the beast in a solo hunt) as well as 2 hunts against the Banbaro (1 in a 4 player party with the public, and another solo during our private session - we successfully felled it both times). Both hunts were timed with a 20-minute limit, and our equipment was standardized. We could choose our armor pieces and weapon out of any of the sets provided, but most of their stats were actually normalized to (presumably) make the demo easier to parse for newcomers to the franchise. 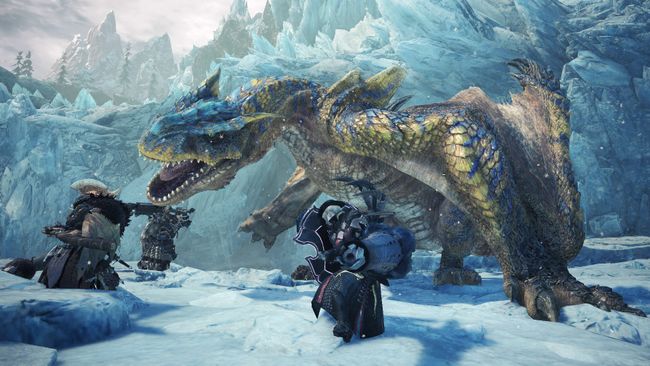 Both of these hunts took part in the Hoarfrost Reach. Capcom says it's now the largest area in the game, and while I didn't quite get to explore every area since I was focusing on killing the monsters, it definitely feels both larger and more dynamic than any other area in the game. Players trek through the snow, leaving visible trails in their wake, and even monsters tracks leave imprints in the snow. Much like with glacial regions in previous Monster Hunter titles, you'll want to partake in a Hot Drink to prevent your stamina bar from decreasing at a rapid pace.

The biome is full of hills, trees, and caves. One area that the Tigrex loves to spend time at has the floor almost entirely comprised of ice, and when he roars the section of the ice where he's near might fall into the sea - with you along with it if you aren't careful. Another has cracks in the ice where hot air occasionally spurts out, where you can use the Gilder Mantle to attempt to aerial attack the monster. Though be careful - if Tigrex is mad, he will jump into the air to swat you down. This happened several times during my hunts, including one time when I was hanging off a wedge beetle, pretty far off the ground. 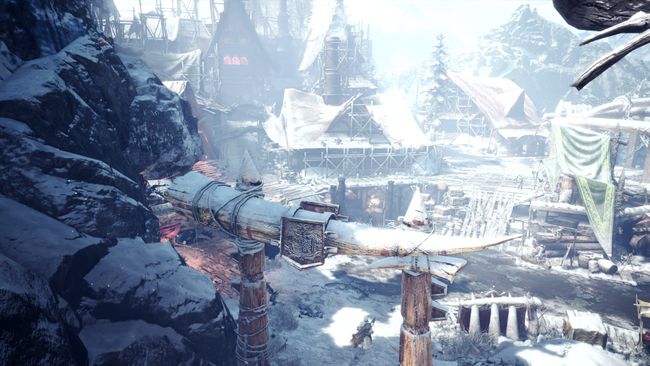 Tigrex has made a pretty seamless transition to Monster Hunter: World's structure. I didn't see any new moves of his, but more or less his entire moveset from previous titles remains intact. You've got his triple charge, his hop, his roars, his spin - everything. Even parts of the environment exist that accommodate some of his weaknesses in previous games. If he runs into a wall when he's charging, sometimes he can get stuck - there's a section in Hoarfrost Reach with pillars of ice that he can get himself cot onto, that crumble away after he frees himself.

Banbaro is a new monster for Iceborne and one that incorporates elements of monsters such as Deviljho, Tetsucabra (from the 3DS/Switch titles), and more. He has a bit of a moose theme going on with his aesthetic, even though he's definitely some sort of wyvern. He uses his horns to roll up ice, snow, and rocks - and he can even grab a tree trunk with it to use as a sort of plow to attack the hunter. Despite all this, or maybe because Capcom adjusted his damage output for the demo, he wasn't as difficult to fell as Tigrex. He's still very interesting to tackle, and not quite like any one specific monster currently in Monster Hunter: World. 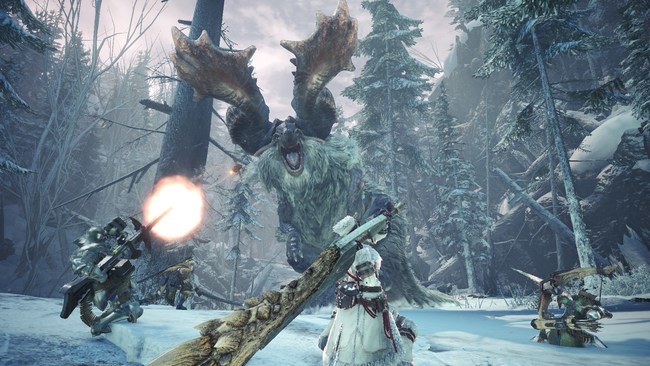 Besides Hot Drinks, and a few minor moveset tweaks for weapons, the biggest new addition to Iceborne comes via the Clutch Claw. As summarized earlier - it can be seen as an expansion of the already existing Slinger system. With it, you can grapple onto a monster immediately, and either try to distract them into a wall or ledge, or weaken a body part so that it will take extra damage for a short amount of time. It's a neat function, but I get the distinct impression that it's more geared towards multiplayer, as if you're playing on your own it would just be more efficient to continue attacking a monster directly rather than attempting to weaken them first.

If it wasn't clear by my review, I was infatuated with Monster Hunter: World's initial release, so I knew I was going to be excited for any expansion that came out for it. Even then, Iceborne seems to be doing everything I wanted to see from an expansion to Monster Hunter: World. Enemy variety, while it doesn't quite seem to be up to par with Monster Hunter Generations Ultimate, is definitely improving with this release, and the gameplay has never been better. I desperately want to play more. It's only a few months away from launch, but the wait for Iceborne has never felt longer.

Monster Hunter World: Iceborne is coming to PlayStation 4 and Xbox One in Autumn 2019