When Paranoia: Happiness is Mandatory was announced a couple of months ago, it was hard to say exactly who the game was for. Like Baldur's Gate 3 or even Pathfinder: Kingmaker, Happiness is Mandatory is a video game adaptation of a pen-and-paper RPG, in this case Paranoia. Unlike Dungeons and Dragons or Pathfinder however, Paranoia is more slated as a competitive game of backstabbing your friends and betraying the Friend Computer, more than a framework for a party of adventurers. While I haven't personally played the tabletop game, I did see a few lingering comments and questions about how exactly a competitive tabletop game can be faithfully adapted to a single player RPG experience. I had a chance to sit down with one of the developers from Cyanide to learn a little more about this interesting project. 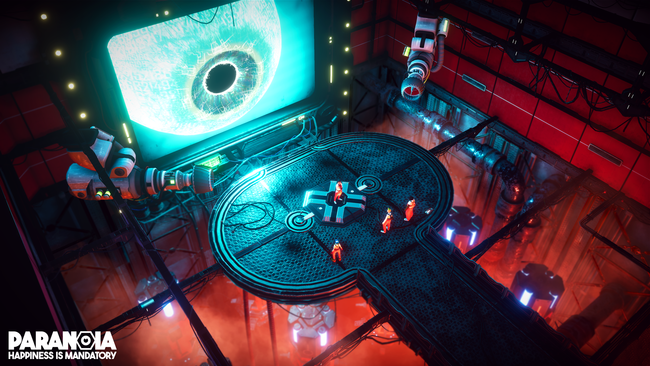 From a cursory glance, Paranoia looks to be organized the same as any other isometric RPG -- you have a party of four characters, some enemies to shoot at, a few dialogue windows to read through, the usual fare of mechanics and features. However, being able to go hands-on and chat with some of the team members at Cyanide did point out a few ways where Happiness is Mandatory is attempting to adapt some of the more unusual aspects of the pen-and-paper game's features in order to make a pretty unique experience.

For instance, in any main area of Alpha Complex, a futuristic dystopia under the watchful eye of Friend Computer, the player themselves is always being judged about whether or not they are a traitor to the Complex, indicated by an eye and treason level at the top of the screen. Sneaking into restricted areas, stealing items, and the like will increase the player's treason level, which eventually may lead to a face to face confrontation with the Friend Computer. 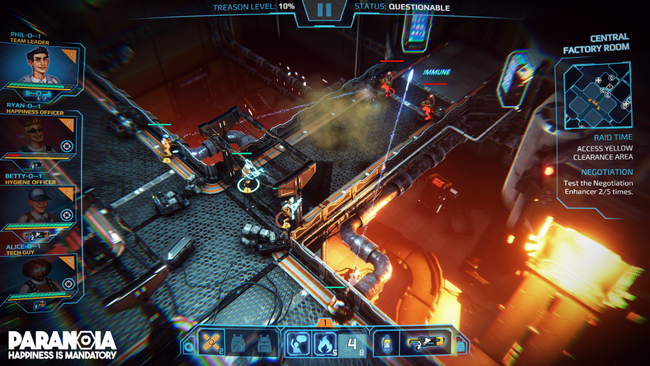 Complicating this factor are how the game's party members work. In fact, during my time with the game, I was told that the term "collaborator" or "coworker" might be more appropriate. At the start of any investigation, the player is asked to pick three party members from a pool of options. Each character has their own specific goals and internal motivations, including sometimes turning on the player and accusing them of being a traitor -- despite how careful they are to not break any of Friend Computers draconian rules.

For example, in my gameplay demo one of my party members suggested that I buy items from a vending machine in a specific area of the complex, only to rat me out to Friend Computer later. She instead told it that I was in an area I wasn't supposed to be in, which frankly was the truth but not something that had been brought up earlier.

This led to a confrontation where I had to defend myself in front of Friend Computer, typically by either lying or at least stretching the truth. I'm told that the opposite situation can also happen, where a player's misdeeds can be blamed on another character to prevent increasing your treason level, but it wasn't something I got to see firsthand in the demo. 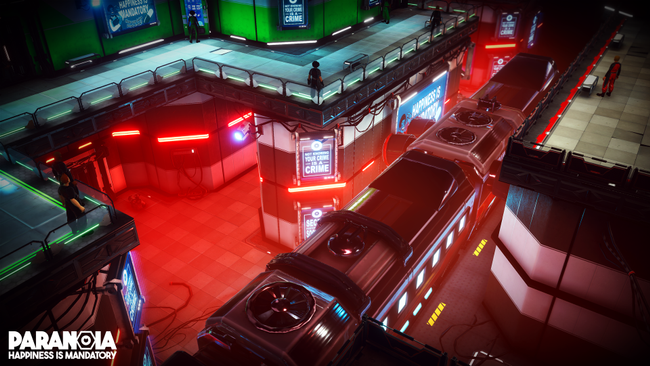 You see, everything in Paranoia is color-coded. At the start of the game, the player acts as an investigation team lead with Red clearance, the lowest level. Clearance level is so important in Paranoia that each character's current clearance level is always visible in their namecard as well as by the equipment they're wearing. In addition to this, energy weapons from a lower clearance such as Red cannot harm anyone from a higher level like Orange, which is a stark example of how stratified the clearance levels are. Melee weapons and such can bypass this technicality, but are against the rules, of course. Certain areas are restricted to people with specific clearance levels, such as the vending machine from above -- it was not a place a Red clearance holder should have been in.

Visually, Paranoia has kinda a distinct look to it, both due to its history as well as due to a deliberate choice by Cyanide. As a game originally from the 1980s, Paranoia sports an art style that seems equal parts Don Bluth and Fallout (which, of course, the tabletop game actually precedes). Everything is brightly colored and outwardly cheery, masking a layer of more dark humor and satiric mockery of being overly bureaucratic. It doesn't quite have the same feeling of seeing a cutesy Pipboy character on your wrist while traveling post-apocalyptic America, but it's in the same ballpark.

Another interesting little feature in the game is the idea of clones. In the tabletop game, each player is given six clones so that players can continue playing even in the face of gruesome death or execution. Happiness is Mandatory adopts this idea, with the idea that it will encourage players to take more risks and not feel completely bound to always escaping every confrontation unscathed. There will actually be unlimited clones available for the player to fall back on in the case of an untimely demise, but only the first six or so will allow the player to respec, so it sounds like there will still be some incentive to not needlessly burn through clones. 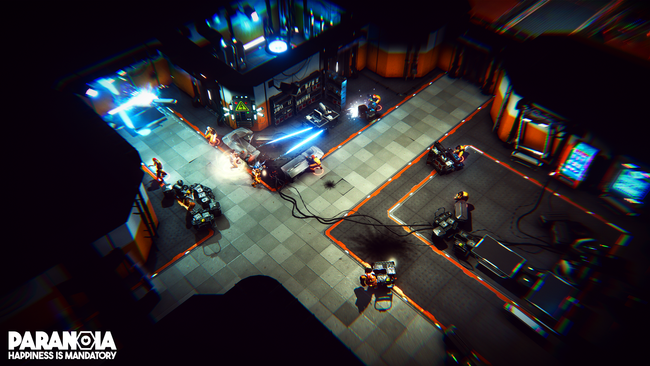 The gameplay demo itself was relatively standard fare, but still ran well without noticeable hiccups or slowdown. Character movement seemed snappy and responsive, UI and mouseover elements were clear and distinct, and animations seemed slightly exaggerated but appropriate for the artstyle.

I wasn't really expecting to be super enthused by my time with Happiness is Mandatory -- I don't have any history with Paranoia and wasn't sure I was interested in the game's general premise. However, I ended up walking away a little bit more impressed just due to some of the different features at play such as the idea of clones, security clearance, backstabbing party members, and the like. In a packed year for RPGs later in 2019, Paranoia might not easily stand out, but maybe it's worth keeping an eye on if 80s-esqe sci-fi dark humor sounds like your sort of thing.

Paranoia: Happiness is Mandatory launches for PC on October 3