Science Fiction is a genre that is more often cropping up in RPGs, though few Japanese made ones actually go the full whack and are a remorseless RPG romp through space. Thank the lord, then, for Square Enix's Star Ocean series, which allows you to do just that.

Star Ocean: The Last Hope is the fourth entry in the series but is actually the first chronologically, a prequel which depicts mankind heading into space to escape a ruined planet Earth, ravaged by Nuclear Warfare to a near-unlivable state. While refining their space technology, mankind sends advance parties into deep space in order to attempt to find a new home amongst the stars.

Despite the setting, Star Ocean has a very clichéd JRPG cast and storyline agape with plot holes but the actual underlying story has the potential to be fairly interesting - it just never reaches that potential.

Sadly, the plot holes and clichéd cast aren't helped by the terrible, ham-fisted voice acting. The translation is good enough on paper, but it makes the classic mistake of being far too literal - resulting in hours of characters repeating themselves and phrasing things in a strange, incorrect way that can only be compared to bad English anime translations.

Characters will monologue about practically nothing for minutes at a time, and some of the more pivotal cutscenes can drag on for over half an hour.

While you are flying through space and landing on various planets in this world of high technology our hilariously named protagonist Edge Maverick still wields a sword (admittedly a space sword) and still spends much of his time opening chests and battling creatures that match up more to the fantasy RPG stereotypes set in games like Final Fantasy and Disgaea than Sci-Fi.

This leaves the science fiction setting often feeling under-utilized, but at other times the influence of Sci-Fi, in particular the game's stated influence Star Trek is clear and profound.

The design of the actual world of Star Ocean: The Last Hope is second to none, and the immense amount of imagination and talent that went into realizing the different worlds you can visit and the space that surrounds them is quite apparent.

Even if the worlds themselves don't have the biggest or best variety of enemies to battle, NPCs to interact with or quests to undertake, one thing you're guaranteed from The Last Hope is some amazing looking worlds to explore that give the 360's graphical capabilities a push. The character models aren't as good, but they blend into the pretty environments well.

In addition to beautiful world design, those who can fight past the clichés, plot holes and voice acting will find themselves immersed in quite an entertaining gameplay experience. The Last Hope's battle system is some of the most fun we've had in a next-gen RPG.

You take control of one character from a party of four, and you can move this character freely around, allowing you to either attack an enemy head-on, flank, or remain at the back of your party firing off ranged attacks to do damage from a safe distance. It's another fusing of Action-RPG and Turn Based elements, and it's been handled masterfully.

You can switch between the four characters in your party on the fly, meaning you can mix and match the different skills and abilities of the characters as you please. Those you aren't controlling at any given time are controlled by basic AI behavior instructions you can set.

The system for AI behavior isn't as comprehensive as FF12's Gambits, but it's certainly more than adequate considering you're likely to be switching who you're controlling a lot more than FF12.

All the traditional RPG elements you'd expect are here, with a sizable number of skills and moves at your disposal as well as an attack combo system and "Rush Mode" - a Star Ocean equivalent of Limit Breaks or Overdrive.

New to the Star Ocean series is the 'Blindside' maneuver, which slips the action into slow-mo as your character slips behind the enemy and lands several critical, devastating blows to their exposed back. The combination of all these elements as well as a number of differing party members to try out gives players a lot of freedom in combat meaning there's plenty of replay value in trying out new battle tactics.

At the end of each battle experience is gained and can be used, and bonuses in both experience and items from battle can be gained by fulfilling certain criteria. To the right of the screen during battles is a board - the Battle Board.

This will fill up with criteria such as defeating multiple enemies at once or finishing an enemy with a critical hit or certain skill. Fulfilling these requirements will give you a bonus and stacking them will increase that bonus significantly. This makes you use a variety of moves and skills, which is always a good thing.

It wouldn't be an RPG without leveling up and progression, and as characters fight they'll gain skill points which can then be spent on upgrades and new skills for each character. The number of skills on offer opens up more and more as you get further in the game, but players will quickly discover that this game has far more skills and abilities on offer than most other RPGs.

A new system known as BEAT allows you to really get down to the nitty-gritty of upgrading your characters if you so wish, turning certain characters into specialists in specific areas.

Skill points can also be used in the item creation area, which is an entirely optional pursuit in this title. The items that can be created range greatly from standard, fairly normal items that can be bought in-store to exclusive, powerful items that can't be gained anywhere else, but the latter will only become available to those who become skilled at Item Creation, but it's nice to have this optional task return for completionists.

Completionists may groan at the content of Star Ocean, too - there's a lot to do. On each of the planets there's a range of quests on offer, and in true RPG fashion some are epic, world-saving quests and some are simple fetch quests for the world's inhabitants.

In addition to a number of side quests there's also the return of battle trophies - awards that can be given to each character for various in-battle tasks. Earning these trophies takes time, but those who want 1000 gamerscore will have to take the time to complete them.

The storyline quests of The Last Hope suffer from lengthy cutscenes, and often feel like they've been designed in a way that artificially extends the length of the game - prepare for backtracking. This is made more tolerable by the fact that the environments of Star Ocean are pretty - walking through a nice-looking dungeon twice isn't as bad as walking through a boring one twice.

Motoi Sakuraba is on Composing duty and does a fine job of providing the perfect soundtrack for this title. While the soundtrack to this game isn't as good as his work on Eternal Sonata, that's quite the score to beat.

Star Ocean: The Last Hope is an interesting game for several reasons - it's the latest title in a much-loved series but it chooses to do things differently on a different console. It's a Japanese RPG, but it's also Science Fiction - which perhaps is the best way to sum up this game.

Star Ocean: The Last Hope has the Science down to perfection - the environments are beautiful and the battle system is fun, engaging and addictive. The Fiction leaves much to be desired though, with tired JRPG and anime clichés, plot holes and translation and voice acting that leave much to be desired.

With that said this game plays great and looks beautiful - so it's still worth a look. Just skip the cutscenes. 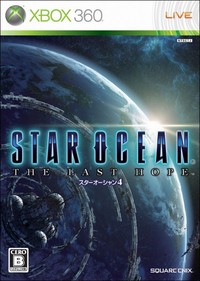