The Disgaea series has come a long way since its humble beginnings on the PS2.  After nearly a decade of demon busting and Netherworld hopping, does the fourth entry live up to its predecessors? 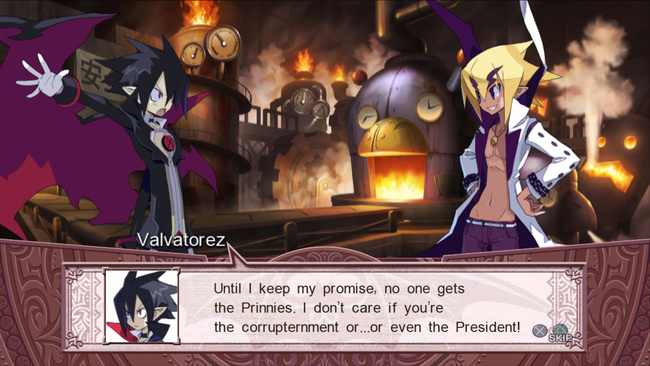 For fans of the series, the gameplay is all too familiar.  At its core, the battle system is relatively unchaged. A traditional Strategy RPG with a chess-like grid, Disgaea 4 boasts a gigantic list of equipment, skills, items, characters, and even stats itself.

The game works like most SRPGs; normal attacks allow you to damage an enemy in a corresponding panel depending on your weapon and position while special attacks and magic are often more lenient with where you need to stand.  Several factors come into play which may change the area of effect or even what the attack can do.  Using this knowledge is absolutely vital in planning your next move.

One such factor are the geo-panels, a returning feature that can completely alter the playing field.  These blocks can be both beneficial and detrimental depending on your position.  If a block is in a colored panel, all panels with that color will be effected.  An example would be "Attack- 50%" or "EXP+ 20%".  If it helps, you can even pick up and throw the blocks to suit your needs.  Learning to use the geo-panels to your advantage will be key to winning quite a few battles. 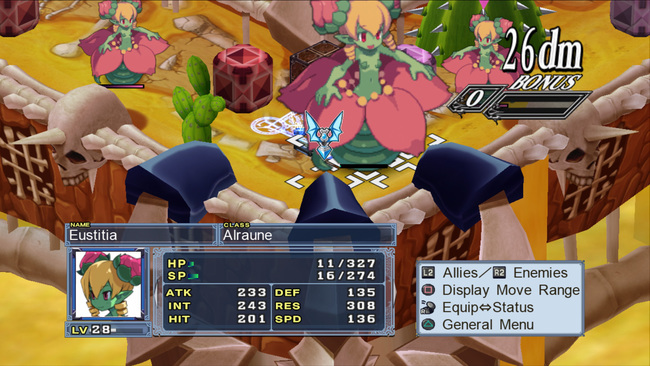 Monster classes also make a return and are more useful than ever.  While still unable to throw, they can now fuse with each other in addition to being able to transform into weapons, a feature first introduced in Disgaea 3.  Combine these two and you'll be treated to a giant super powerful weapon capable of bulldozing through even some of the toughest enemies.

An interesting new feature outside of battle is the Cam-Pain HQ.  This is another grid that deals with pre-battle planning.  For example: someone standing next to another character will be more likely to perform a team attack than someone on the other side of the board.  Of course that's just the tip of the iceberg.  The Cam-Pain HQ increases the out-of-battle options tenfold with various enhancers such as evil symbols which give all kinds of nifty bonuses to corresponding characters.

The Cam-Pain HQ is also where you access the Senate.  Fans of the series are no stranger to this function.  Allowing you to pass bills and create new characters, the Senate is another vital part of the game.  If a senator doesn't want to vote for your bill, bribe them.  If they still don't, beat them up.  That seems to be how politics work in the Netherworlds.

Another series staple that makes its triumphant return is the Item World.  Here you can level up your items in randomized maps where literally anything can happen.  A nice addition to the Item World is branching paths.  With this, you can choose to boost the item even more or find more inhabitants of the item you entered which give bonuses. 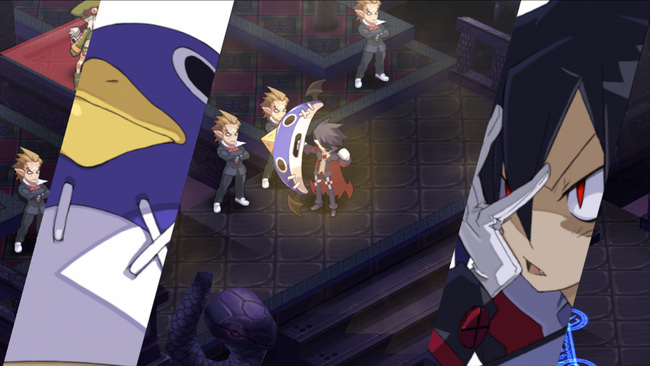 The story once again takes place in the massive Disgaea multiverse, this time starring a vampire known as Valvatorez.  In an interesting twist, Val's "occupation" focuses on one of the afterlife's more sympathetic denizens; the penguin-like former humans called prinnies.  Taking place in Hades, another of the many netherworlds, we finally get a glimpse of the prinnies' "training" prior to being sent off to other Netherworlds.

The cast mostly follows typical anime tropes while displaying their own unique personality quirks.  We got Valvatorez with his sardine obsession and importance placed on promises, Fuka who believes her death and adventures in Hades to be a dream, Desco who aspires to be a final boss, and many more including a few familar faces here and there.  Very few scenes are taken seriously by the characters as they lampshade modern anime tropes and absolutely destroy the 4th wall.  This is reflected in the voice acting, which you can tell was a blast to record as the characters ham it up while making fun of various things the genre is associated with.

As expected of composer Tenpei Sato, the soundtrack is incredible.  With tracks that range from extremely triumphant to surprisingly somber, it's amazing to think someone was able to put together such well composed music despite being in entirely different genres.

The graphics are an improvement over Disgaea 3 mainly due to the upgraded spritework.  With the sprites legitimately high-resolution this time around, the game definitely takes advantage of the hardware.

The animations are pretty much what they have always been; smooth yet imperfect.  That of course doesn't make the extremely exaggerated special attack visuals any less impressive.  Only the most picky of animation connosieurs will find something to complain about.

As with the rest of the series, the game puts a large amount of emphasis on post-game content.  As the meatiest entry yet, you can easily find yourself spending hundreds of hours trying to beat super powerful bosses and unlocking even more content.  The amount of options in how to power up your characters is almost overwhelming.

Overall, Disgaea 4 is a great addition to the series and among the best SRPGs this generation.  With a lengthy single-player campaign, a robust lineup of over 30 character classes, online functionality, and much more, the game will keep you busy for a very long time.

If you couldn't get into the series before, this won't change your mind.  Fans on the other hand will find plenty to love between the colorful cast of characters and the staggering amount of content both in battle and out.

A handful of Disgaea 4: A Promise Revisited screenshots 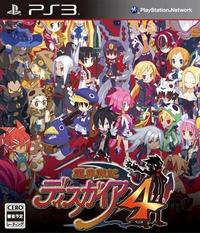