Here we are, in the week-end aftermath of Halloween, the spookiest night of the year when all the freaks come out crawling in search of blood to terrorize your neighborhood, and I was thinking about what kind of game I could cover for the site to help remember one of my favorite holidays of the year. There aren't a lot of horror-themed RPGs that can really be considered for coverage, so I started a journey into looking into more of the bizarre. Little did I know that I would stumble upon what may be the most ridiculous, over-the-top RPG I have ever played.

For those of you uncultured with the man, the myth, and the legend that is Mark Leung, his story began a few years ago where he took to Youtube with his directorial debut, College Saga, a series of satirical videos whose goal was to make fun of as many classic RPGs and their myriad of annoying tropes as possible. The videos garnered nearly 6 million views and went on to become a Youtube sensation hailed by gaming geeks across the globe. 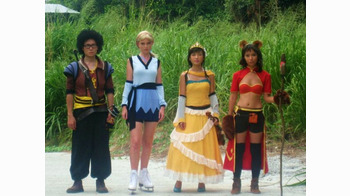 Looking to capitalize on their popularity, Mark and his development house Uglysoft make their debut with Revenge of the Bitch, an independently-financed episodic series. Utilizing the strength of Torque Game Engine Advanced, the same engine that powered Marble Blast Ultra and the Penny Arcade games, RotB features many of the same plot elements from College Saga, especially its burlesque derivatives and frequent use of callbacks fans will quickly notice. For those of you not easily offended, hop on you rtrusty Crocobo and ride along with me as we take a look at Mark Leung: Revenge of the Bitch.

Set in the world of Untitled, you play as Mark Leung, a selfish atheist from a family of Communist ginseng farmers living in the Kingdom of Hong Kong. After an ugly break-up with his insanely-attractive girlfriend (read: she has a unibrow and dirty ‘stache), he is quickly caught up in the affairs between two religious factions: the Church of N00bism and the Church of Vegetology.

You see, years ago, Feng Shui Shrines were set up that turned people into cockroaches if they didn’t eat their vegetables. Promising a bounty of vegetables and liberalism, love, and partying to be had by all, the Church of Vegetology was founded by the aptly-named L. Ron Diculous (see what they did there?) in the great land of Nebraska, looking to exploit the fears of the masses.

With me so far? No? Well, let’s continue anyway.

Shortly after meeting up with his cousin, Dick, they are brought before the king of Hong Kong, King Kong, who informs them that there is evidence that Diculous maybe the culprit behind the terrible human-to-cockroach metamorphoses that plague the world, and that he may have a safe haven in war-struck Canada, because it is the only vegetable exporter in the world. An air-tight case if there ever was one, which thusly begins our hero's journey. 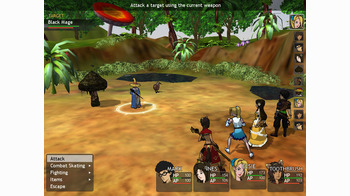 Combat is a traditionally turn-based affair, with each character fulfilling their specified role in battle. Not satisfied by featuring a rather simple battle system, a welcomed inclusion is the ability to assign support classes that are unlocked as the game goes on. Mark, for example, is primarily a Fighter, able to launch devastating melee attacks while also taking heat away from other party members to ensure their survival. To offset the amount of damage likely to be inflicted upon him, he can equip a Healing support class to recover life points or buff up his stats which can come in real handy during the many difficult battles the game boasts.

The enemies roaming around the open fields range from cute and fluffy critters to the HOLY SHIT WHAT IN THE WORLD IS THAT?! amalgamations of my worst nightmares. When you're not busy beating up bitchmonkeys, lamboguineas, and loltrolls, you're saving a fat bearded man cosplaying as Sailor Moon on a little girl’s tricycle from a pack of naughty leprechauns all named Patrick that sprout rainbows when killed.

There is even a morbidly obese Pikachu clone called Pikachubb whose main attack is to release the power of epileptic seizures upon the party. Not only that, but he can also “choose” Ash Ketchum to pimp slap a party member – and if you know anything about Ash, you know he likes to keep his pimp hand strong. Seriously, I wish I was apart of the acid trip that Mark and his friends were on when they came up with these characters.

Even with the strong foundation of the Torque game engine that has helped power some of the best indie games out there, all signs indicate that this is certainly a very indie production – the game suffers from a very short field of vision; plenty of muddy textures; imbalanced sound design especially with the voice acting; large amounts of backtracking; and its fair share of bugs and glitches that can be reproduced at will, even those of the game-crashing variety.

The raunchy writing also enjoys flirting with the opposite sides of the extreme: there are points where I am literally falling out of my seat from laughing so hard, and other times where I have my palm soldered to my face with how annoying the interactions can get. 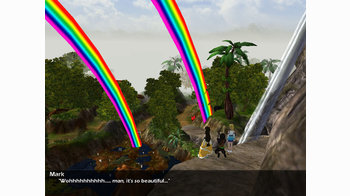 And yet, even with all of its shortcomings, the game seems to make up for a good chunk of it with an actual breadth of solid RPG mechanics. The ability to switch around support classes that include their own stats and abilities with each character, craft ginseng into vitamins to boost stats, and even use aggro to your advantage is impressive. The difficulty also gradually increases at a satisfying rate so that battles are only challenging enough to give the player a sense of accomplishment after defeating the random enemies and bosses that fill the game.

Overall, the episode boasts around 10 hours of content with several side quests, like recovering kangaroo fetuses or slaughtering panda bears; plenty of voice acting; music that does a good job in complementing the experience; and the star of the show here - gut-bustingly hilarious full-motion cutscenes. For a $9 game, there is a lot of entertainment value to be had by all, and that is saying a lot when we’re talking about a piece of software made by a group of inexperienced game developers.

When I am not too busy stabbing myself in the eyes with a dirty spoon every time one of the characters uses internet speak in their voiced dialogue, I start to appreciate the fact that without Mark Leung, this game would be terrible. He is the glue that keeps everything together - his mere live-action presence and the surgical precision of his timing were enough to make me laugh.

My entire experience with the game left me feeling rather polarized: on one hand, it
does a fantastic job doing exactly what it was set out to be: a rude, crude parody of pop culture. On the other, the shtick gets pretty long-winded towards the end of the game.

It certainly isn’t for everybody, and those interested would be better off trying the demo first. However, if you do decide to go ahead and make the purchase and are willing to put up with the sometimes callow script, you will quickly find an independent game with plenty of strong potential worth getting behind. You can grab the game from their official site. Now if you’ll excuse me, I think I need to go have a nice chat with my psychiatrist.

Mark Leung: Revenge of the Bitch 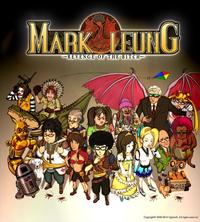 The Dungeon Of Naheulbeuk: The Amulet Of Chaos
Shadow of the Colossus
The Legend of Legacy
Tales of the Abyss
Rollers of the Realm